In addition to sponsoring a giveaway, the folks at Tootsie Roll sent me free samples of two of their newer products for a review. Today, we’ll cover the Junior Mints Deluxe or, as I liked to oxymoronically refer to them, giant Junior Mints. A friend joked that they could be called Senior Mints, but those have actually already been made (they were just like Junior Mints but bigger). 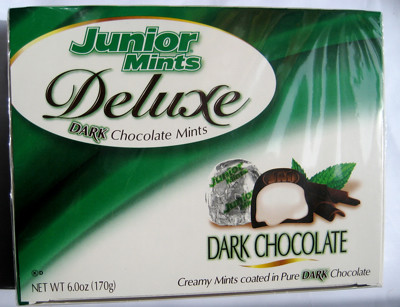 Each Junior Mints Deluxe was individually foil-wrapped, so they look like a fancier treat than their more poppable, theater candy counterparts. They’re nice enough for setting out in a candy dish or for casual company. I’m not exactly sure, as I don’t have regular Junior Mints handy for comparison purposes, but I’m pretty sure the dark chocolate shell of the Junior Mints Deluxe is a higher quality chocolate than that of Junior Mints. It’s glossy, well-tempered, and carries a nice snap.

That dark chocolate, however, is pretty overwhelmed by the mint filling. The mint to chocolate ratio of the Junior Mints Deluxe is completely different from regular Junior Mints. In the Deluxe version it’s more of a MINT!!!! to chocolate ratio. I didn’t mind the extra minty flavor because I enjoyed the refreshment, but it may not be for everyone. 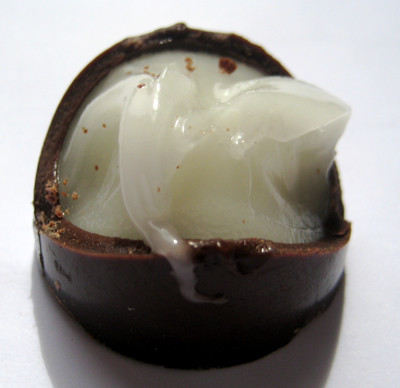 The texture of the filling is interesting, as it’s stiff, yet slightly flowy. It held its peaks, but if I left it sitting around for an hour, it would’ve probably oozed everywhere. The texture was also overwhelming in contrast to the snap of the dark chocolate shell, and that was the ratio imbalance that I took issue with. I didn’t mind the extra mintiness, but the extra gooey I could’ve done without.

Overall, a pretty good product that was quickly snapped up by my friends. I’d give it an OM. I won’t go out and buy more for myself anytime soon, but I’ll happily finish the few that I have left. You can check out Cybele’s Candy Blog take on them here.