These Jolly Rancher Fruit Chews were free samples, courtesy of the folks at Candy Central.

I’m super familiar with their hard candies and lollipops, and I’ve even had their fruit chew-filled lollipops, but this was the first time that I’ve had just the fruit chews. 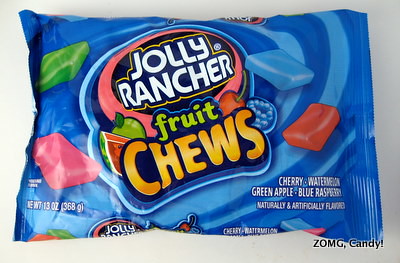 They came in four flavors: cherry, watermelon, green apple, and blue raspberry. All were individually wrapped in colored paper. Not all of them unwrapped cleanly – sometimes bits of paper clung to the candies.

They were soft and extremely chewy, almost taffy-like. And they were extremely prone to sticking in the nooks and crannies of my teeth as they neared the end of their chew. 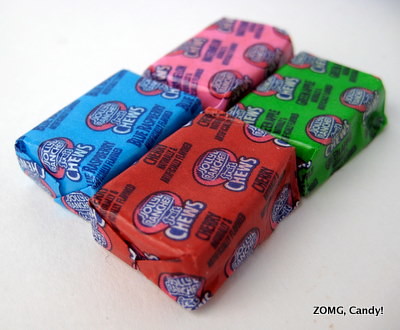 Cherry was red. It initially tasted of plasticky and papery overtones before yielding to a bright, fruity sweetness. It didn’t make me think cherry, and the plastic overtones were really off-putting.

Watermelon was pink. It tasted quite true to watermelon flavored Jolly Rancher hard candies. It was bright and sour, with a tinge of almost-citrus. 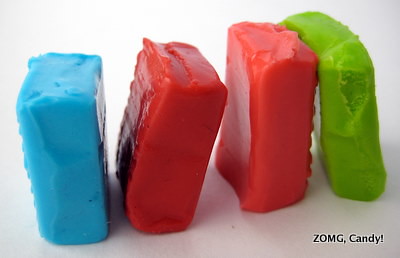 Green apple was a neon lime-green. It too, tasted just like its hard candy counterpart. There was a faint petrol hint to the flavor, but it mostly tasted of a nice candied green apple favor with a tinge of sourness.

Finally, blue raspberry was a bright, not-found-in-nature blue. For no conceivable reason other than that candymakers decided that candy raspberries should be blue. 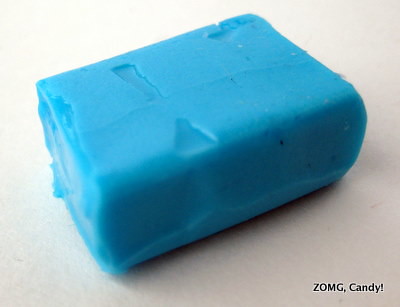 It had a strong seedy olfactory bite that I hate in the hard candy version of raspberry Jolly Ranches. There was a solid, nearly bitter bite to the finish that rendered me unable to finish the chew.

I enjoyed the green apple and watermelon but didn’t care for cherry or blue raspberry. I much prefer Starburst, which have a stiffer chew and better flavors. A — for the blue raspberry and cherry. O for the other two.