Could it be? Could Jolly Rancher have made an American version of the European filled licorice that I love so much with their Awesome Twosome Chews (received as free samples via the National Confectioners Association)?

Not exactly. But they were still pretty good! 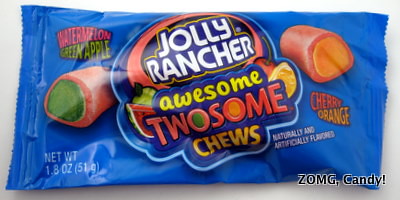 They came in two flavor combinations: watermelon/green apple and cherry/orange. All of them had a fine granulated sugar on the surface, a chewy, soft licorice-textured shell, and a soft, smooth paste filling. 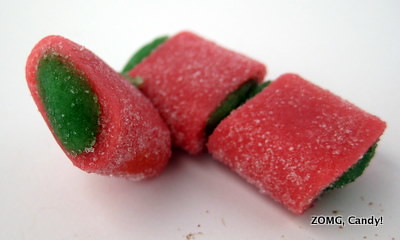 It tasted mostly of watermelon, with a bit of a plasticky finish. The watermelon shell was sweet and floral, while the green apple was like a mild green apple Jolly Rancher. 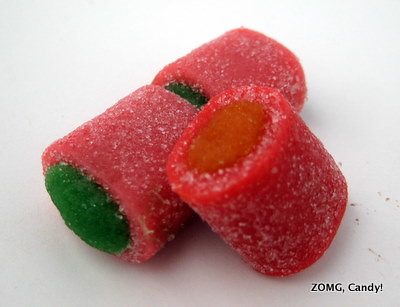 Cherry/orange had a red cherry shell with an orange filling. Here, the filling was the overwhelming flavor. The cherry part tasted like a red popsicle, while the orange tasted like my ideal candy citrus flavor – sweet and slightly tart.

These aren’t perfect, but I’ll still give them an OM. They’re a little too sweet, but they’re a nice change of pace and reminiscent of my beloved filled licorice.