I received a generous assortment of free samples from the Jelly Bean Factory, sent all the way from Ireland. In the U.S., they’re sold under the name Jelly Bean Planet.

I’m under the impression that they’re the Jelly Belly of the U.K. I actually gave the Jelly Bean Factory a brief review when I bought a tube of their candies the summer I was in England. 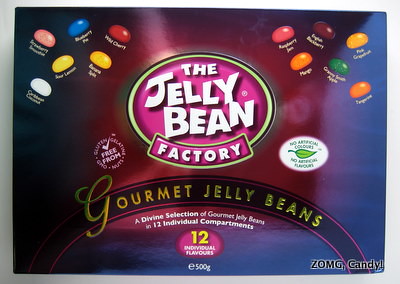 The box, as touted on the front, was subdivided into 12 compartments. They were so crammed full of jelly beans that they overflowed into each other.

Blueberry pie was denim colored. It had deep blueberry notes and a lightly sweet hint of spice. The shell had a pleasant crackle to it. 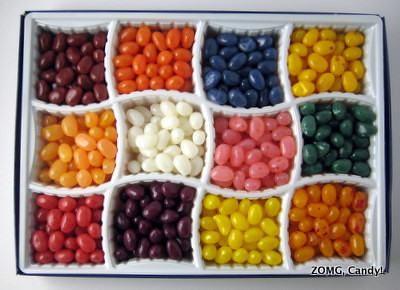 Wild cherry was the paler of the two maroon beans. It started off bright, then gave way to jammy red fruit notes. I enjoyed it, though I wouldn’t have pegged it as cherry.

Raspberry jam was the lighter maroon. It tasted bright and juicy and had a plummy finish (I double checked against the back of the box; I’m pretty sure I didn’t get it mixed up with the wild cherry).

English blackberry was a deep purple. It had a great bright, juicy sweetness but otherwise was generically fruity to me.

Pink grapefruit had the pale pink-orange coloring of the actual fruit’s rind. It was extremely zesty with a genuine grapefruit flavor. The bitter pith finish was almost too much to bear as it lingered in the finish.

Coconut, a translucent white, was refreshing and tropical. It almost tasted like sunscreen smells – not in a bad way, but that does mean it was more artificial than genuine. It had a nice dairy finish. 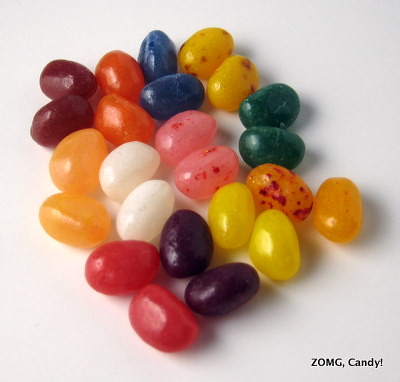 Sour lemon was brightly yellow. It had a fresh and zesty initial flavor pop. I wish the brightness carried on further into the chew, but it was still quite nice.

Banana split was a mustard yellow speckled with brown spots. It had a banana flavored overtone that was chased by a bright fruity sweetness that reminded me of the sugar syrup of canned fruit. I usually don’t like banana flavored things, but these were bearable for me.

Mango, orange with red spots, started with a striking seediness that tasted like fresh mangos. It quickly mellowed out, but the zippy seediness lingered.

Granny smith apple was a surprisingly turquoise-tinged shade of forest green. Upon first bite, it had a nice green apple tartness to it. That quickly faded into a mellow apple juice sweetness rather than a real granny smith’s sharp sourness. The finish reminded me of caramel apple pops.

See also  How To Boost Your Body's Natural Defenses

Finally, tangerine was orange colored (surprise!) and had a nice zesty juiciness with a slide bitterness. Overall, though, the flavor was solidly of fresh oranges on the mellower, sweeter side of things.

I thought these were a solid set of intensely flavored beans. An OM.