Speaking of Jelly Bellies, I had bought two small boxes of duty-free Jelly Bellies on my flight to England to give as hostess gifts. Though I saw them at John Lewis, a high-end U.K. department store, and sold with a Marks and Spencer’s stamp at, you guessed it, M&S, none of my Jelly Belly recipients had heard of them. It seems that Jelly Belly has a bit more work to do before they can crack the U.K. market, yet they already have a knock-off competitor in The Jelly Bean Factory’s Gourmet Beans.

These beans come in 36 flavours (to Jelly Belly’s official 50) and include many of Jelly Belly’s favorites (or favourites) like buttered popcorn, pink grapefruit, pina colada, and tangerine. There are also a few flavours that were less derivative, such as cranberry & apple, mint sorbet, and passion fruit.

I’m not going to review each individual flavor, as that would take forever, and the Jelly Bean Factory’s guide isn’t as clear as Jelly Belly’s sheets so it can be hard to tell what the different beans are. Overall, I found the Jelly Bean Factory’s beans to be inferior to the real deal. They were better than generic jelly beans, but the depths of the flavors in the shell and the jelly insides just don’t quite come up to snuff. 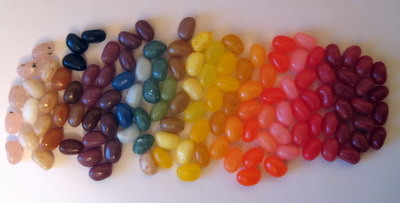 They do make a beautiful spectrum though. I bought these in a tube (as far as I can tell, these only come all mixed-up in a big bag or tub or tube) and had great fun sorting them by color. A few flavours stand out in my mind, so I’ll dwell on those.

Pink grapefruit was lovely, tart, and sweet. Grapefruit is too rarely used as fruit candy flavoring, I think. South Seas kiwi wasn’t as good as Jelly Belly’s kiwi. With Jelly Belly, you can almost taste the kiwi fuzz. With the Jelly Bean factory, I don’t know if I could have determined what flavor it was without looking. 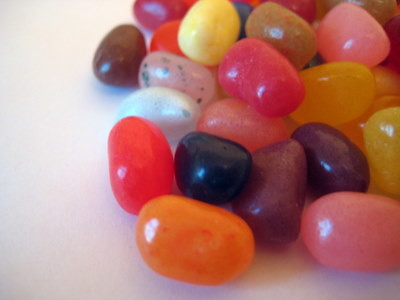 Buttered popcorn in the Jelly Bean Factory mix was pretty good. I guess if you’re going to copy such an unusual and iconic flavor, you should make sure you do it right. I wonder if I could taste the difference between the Factory and the Jelly Belly in a blind taste test.

Licorice made me mad. It was actually a deep blue-purple rather than a genuine and opaque black, so I kept eating them thinking they would be a fruit flavor and spitting them out again. Mint sorbet was also strange, mostly because it stood in such shocking flavor contrast to everything else.

I’d buy these again if they came nicely separated by trays so I could really taste them carefully and know what I’m eating, though that would deny me the fun of sorting them by color. But the desire to retaste is fueled by curiosity rather than desire, so they get an O. When faced with a choice between these and Jelly Bellies, it’s Jelly Bellies all the way.