I’m sure I left y’all on the edge of your computer chairs last Friday when I promised weird Japanese Kit Kat reviews. Here are the remaining three in order of escalating weirdness. 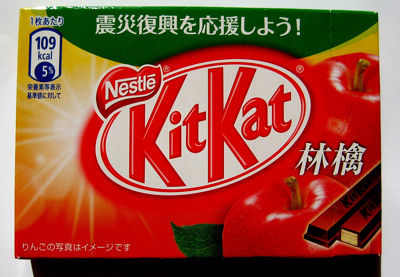 Apple and chocolate aren’t an unheard of combination, but I’ve not enjoyed it in the past. In the Kit Kat iteration, it’s less bad, but it’s still not good. 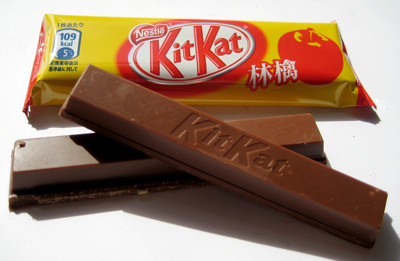 Visually, it seems just like a normal Kit Kat. Though it smells strongly of Fuji apples, it initially tastes mostly of chocolate. Then the apple comes in. It’s weird and unpleasant and kind of earthy, more like an apple core than an apple. A —. 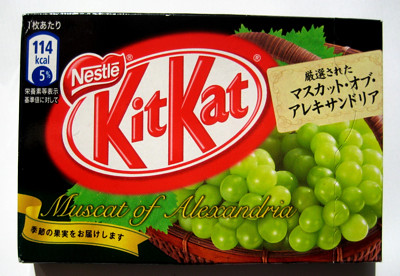 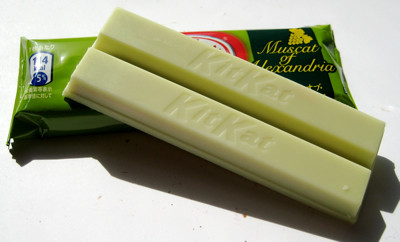 I also don’t know why people thought grape flavored chocolate would be worth making. This bar is white chocolate with a pale green tinge, at once pretty and alien. I think it smells more like lychee than grape, but the taste is white grape all the way through. Would you want to eat grapes and white chocolate in the same bite? I wouldn’t, but I did try this bar, and I didn’t like it. Another —. 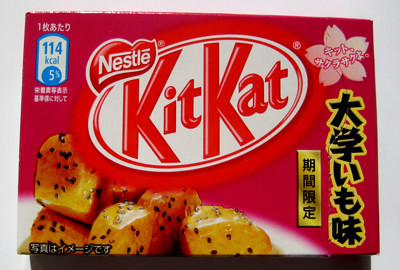 Finally, the mystery flavored Kit Kat. I don’t know Japanese, but I know some Chinese, and there’s a lot of character overlap. I could make out the characters for “university” on here, which didn’t help at all. I guessed that it was candied sweet potato with black sesame seeds. Cassie had no clue, and my boyfriend thought it may be tofu. We consulted my friend Michael, who lives in Kobe. Turns out I was sort of right; it is sweet potato and sesame.

The “university” part was to signal that it was a limited edition bar, released for exam session when Japanese students test to get into universities. Just goes to show you how candy can teach you about other cultures. Can you imagine an SAT Kit Kat being sold in the U.S.? 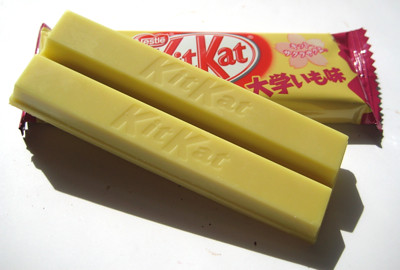 This was another white chocolate bar, tinged pale yellow. It was slightly nutty with toastiness that may have come from the wafers. I don’t really get sweet potato, exactly. The white chocolate is the most prominent flavor. Another —.

Thanks for the flavor adventure, Cassie! I enjoyed tasting them, even if the flavors weren’t that enjoyable. Guess there’s a reason they’re not widely available outside of Japan. Now, if only I could find a soy sauce flavored Kit Kat…