I find it so weird that some candy companies feel the need to add adjectives to their flavors. It’s not blue raspberry flavored; it’s ragin’ blue raspberry. Of course, now that I’ve pointed that out, I can’t think of any other examples, but they’re out there! I know they are. 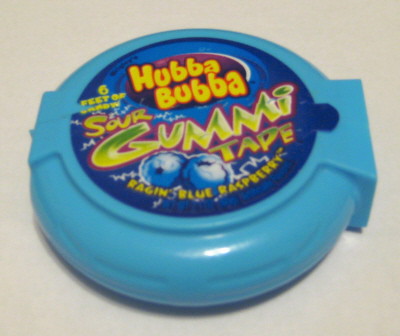 I haven’t had Bubble Tape in at least a decade, so I don’t remember how effective the dispenser was for gum, but it doesn’t work very well for the Gummi Tape. It’s serrated edge is too dull for tearing the gummi against, scotch tape style, and closing the dispenser on the tape bypasses the serrated edge and also doesn’t cut the gummi. You have to clamp the dispenser shut, squeeze hard, and pull hard to have any hope of cutting the Gummi Tape so that you can share it. Of course, while you’re doing this, the sugar coating gets everywhere. I found it easier just to bite pieces right off. Boorish, maybe, but Gummi Tape isn’t exactly haute cuisine. 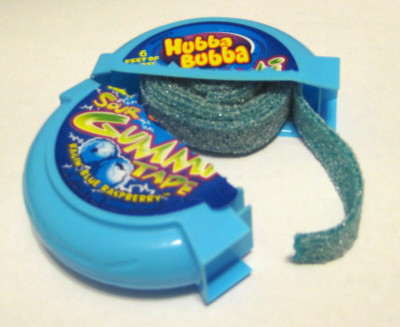 Gummi Tape is similar to the sour belts you can buy out of bulk candy bins, only it’s a little thicker and firmer. The texture was reminiscent of a flattened Sour Patch Kid, so not too bad in the sticks-in-your-teeth-department. The taste was your standard artificially sweetened blue raspberry candy (not one of my favorite flavors, by the way) and not terribly sour. Nothing exceptional or surprising there.

I like gummis, and I liked this enough to be willing to try it in other flavors. Right now it looks like it only comes in Ragin’ Blue Raspberry and Shocking Strawberry, which Cybele reviewed (I laughed inside when I read that she had the same issues with the sugary mess). If they made it in apple or something citrusy, I’d give it another shot.

This only gets an O because Au’somes did the concept way better with their Fruit Juice String. Cybele has a review of that as well (I bought a roll of Fruit Juice String from a sketchy convenience store in Austin before I started this blog, polished it off on the drive home and alas! have yet to come across another one). Here’s the Au’somes website, which distressingly does not mention the Fruit Juice String, but it’s still in their nutrition info pdf, so I hope it’s still being made.