Hershey’s Whatchamacallit is a bar that I’ve seen on grocery store shelves all my life but had never bothered to pick up, probably because I had no idea what was in it. While candy bars like Twix and KitKats had a strong advertising push during my childhood, the Whatchamacallit was neglected. 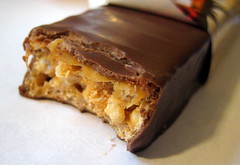 The wrapper claims peanut flavor crisp, caramel, and rich chocolatey coating. The bar was texturally wonderful with a crisp, sharp crunch. The crunchy rice crisps that made up the center of the bar had a salty, super nutty peanut butter flavor, and there was just enough caramel in the form of a thin ribbon to add the sweetness needed to balance out that peanut butter taste. Because the coating was marked as “chocolatey”, it’s probably not real chocolate, but it was a super thin layer, so the fake mockolate (Cybele’s term) did not noticeably detract.

A definite OMG for this bar. I wish I’d discovered it earlier. The only downside is that the bar is extremely high in fat (especially saturated fat) and calories, so sadly, it’s not a chocolate bar to eat on a daily basis.