I got to try this small, sample-sized bag of Hershey’s Drops as a free sample via the National Confectioners Association. 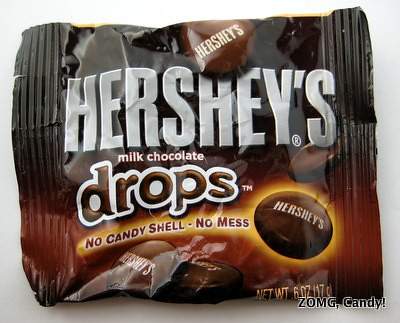 It’s hard for me to envision these Drops as anything but a wannabe M&M’s competitor. Even Drops’s slogan of “No candy shell – No mess” calls to mind the M&M’s catchphrase, “Melts in your mouth, not in your hand.”

The Drops were spheroids, like M&M’s, but they were significantly larger and more irregularly shaped. All of them were imprinted with the Hershey’s logo, which stood out in sharp contrast to the brown Drops. 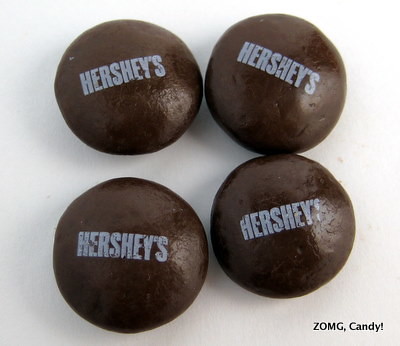 The flavor was that of classic milk chocolate Hershey’s, with that distinctive sour finish. It’s not the classiest chocolate, but it’s certainly a classic!

The chocolate was surprisingly solid. I was expecting a creamy melt. Instead, it didn’t melt so much as dryly dissolve.

The Drops was a suitable shape for a chocolate vehicle, but it lacked the textural contrast of a candy shell and the nice, tongue-coating melt of M&M’s. It was nice to try them, but I wouldn’t buy them. An O.