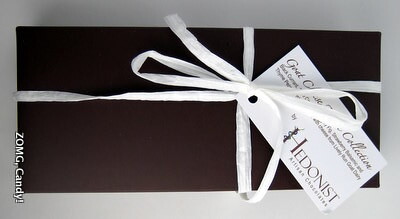 And, as y’all may have guessed, I LOVE chocolate. So I was super excited when I popped into Hedonist Artisan Chocolates one day in June to see that they had a Goat Cheese Truffle Collection, featuring goat cheese from a local goat dairy.

I bought a few and ate them on the spot. Now, a few months later, I got a free sample box of Goat Cheese truffles to properly photograph and review, thanks to the gals at Hedonist. 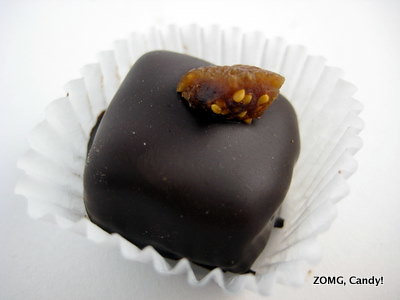 First up is Fig and Honey. It was easy to ID because it was topped by a seed-studded chunk of golden brown fig.

The truffle had a dark chocolate couverture with a textured ganache full of figgy seeds and pulp. The berry-tinged sweetness of fig flavor was clearly present. 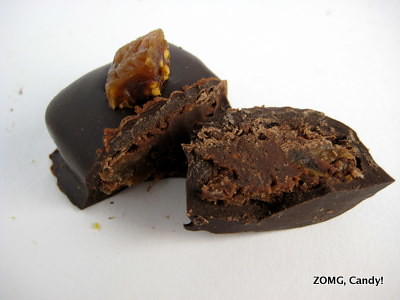 Despite the strong fig flavors, I found that the mellow sweetness of honey dominated this truffle’s flavors. The chocolate flavor comes through in the finish, along with a hint of floralness from the honey. 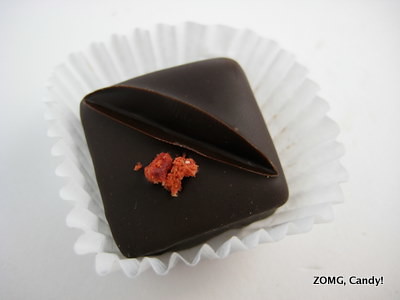 Strawberry Balsamic was easy to identify by a tiny topper of dried strawberry. It had a dark chocolate shell around a deliciously in-your-face ganache.

This truffle’s filling was supremely bright, fruity, and tart. It was cheerfully fragrant with the concentrated flavor of picked-at-the-peak-of-ripeness strawberries. 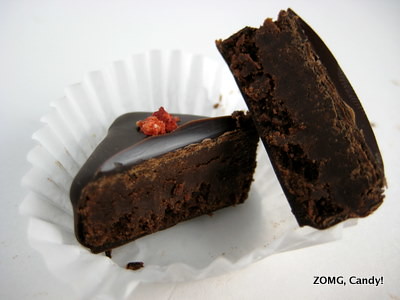 I could tell that the balsamic contributed to the truffle’s super concentrated flavors and especially to the bright tartness. But had balsamic not been in the truffle’s name, I would never have guessed that there’s vinegar in there.

It brought just the right touch of tartness while avoiding the addition of any acidity, bitterness, or unpleasant sharpness. It was a really well-formulated treat. 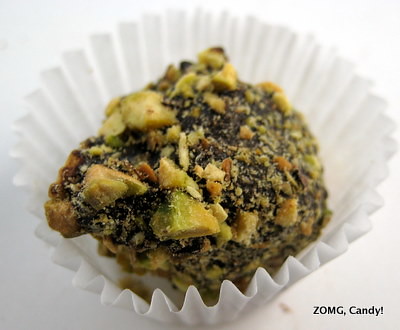 Thyme, Pepper, and Pistachio was the only rolled truffle of the bunch, and the only purely savory one too. It was rolled in crushed bits of pistachio, which provided added nuttiness and crunch. 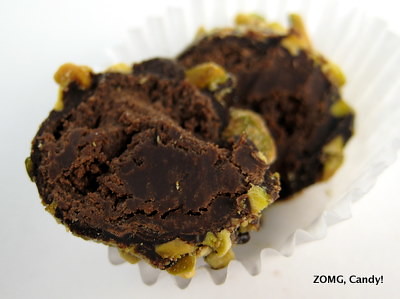 The truffle initially tasted of nutty pistachio with a lightly spicy peppery undertone. Then a big kick of thyme came through and walloped my taste buds with a savory herbalness.

I liked the initial peppery nuttiness, but the emergence of the thyme was strange for me. It was too strongly herbal for my taste. 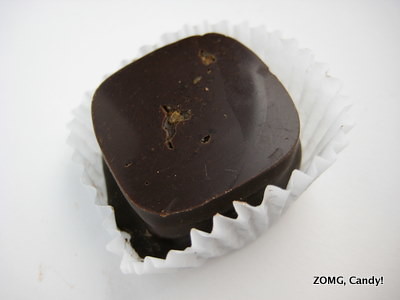 Ancho Chile and Cinnamon was the most nondescript looking one, though it was still gorgeous, with a beautifully tempered smooth and glossy top.

There was a slight grit to the texture of the ganache, I think from the bits of cinnamon. That texturally noticeable cinnamon also brought a touch of astringency to the finish, but it was slight enough that it wasn’t off-putting. 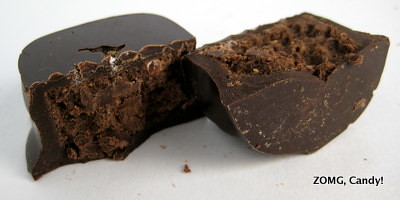 The truffle initially tasted of beautifully fragrant and fresh cinnamon with a lightly fruity undertone. There was just a touch of heat that was barely noticeable at the finish.

While the chocolate, cinnamon, and chile were harmoniously balanced, I actually wished that the heat in this was less subtle. I love chile in my chocolate! 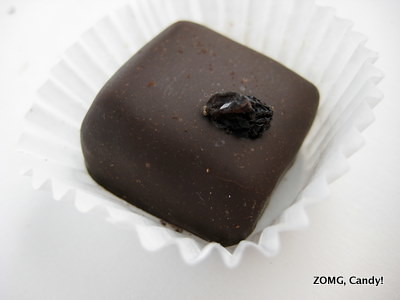 Finally, Black Currant was distinguished by a little topper of what I presumed was a dried black currant. It tasted brightly fruity – like the Strawberry Balsamic – but with a raisin finish. 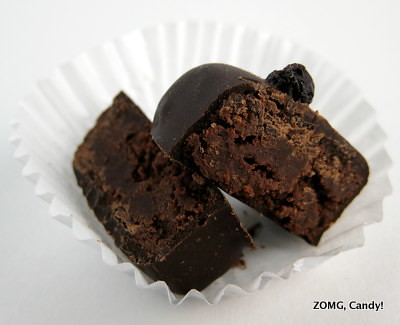 This was the only one of the set in which I could detect the presence of goat cheese. Its influence was light and brought a noticeable tang with an almost pungent savoriness.

The Black Currant was my favorite because of how it managed to blend fruity and tangy and savory. It and the Strawberry Balsamic get ZOMG!s, Fig and Honey and Ancho Chile and Cinnamon get OMGs, and the Thyme, Pepper, and Pistachio gets an O.

I think my favorite part of the collection (aside from the Black Currant truffle) was that they didn’t just let the goat cheese do all the work. It would’ve been easy to just mix goat cheese and chocolate and say, “Look how novel this combination is!”

Instead, they put together a thoughtful and tasty collection that’s much more than just a novel ingredient. Hooray for Hedonist’s effort and care!