Hedonist Artisan Chocolate‘s Fruit and Nut Collection seems to be one of their year-round staples, yet I’d never tried them until now. Fortunately, I recently got a free sample box to taste. 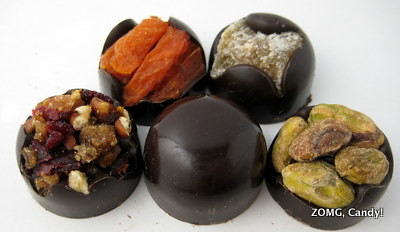 From left to right, top to bottom, they are Dried Apricots, Crystallized Ginger, Cranberry-Pecans, Candied Orange Peels, and Pistachios.

These are a departure from Hedonist’s other truffles. Rather than having flavor-infused ganaches, these are fruits and nuts nestled in dark chocolate. The visual effect is quite stunning. 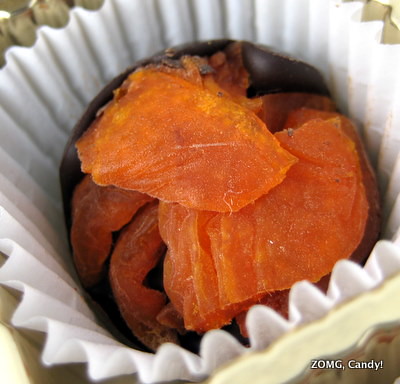 Dried Apricots featured dried apricots that were sliced into slivers. They were stiff and chewy at first bite. After a bit of chewing, the apricots’ sweetness and light fruitiness was released.

I’m not that big on apricots, dried or fresh, so this didn’t play to my taste preferences. It was a little on the chewy side but still a nice flavor combination. 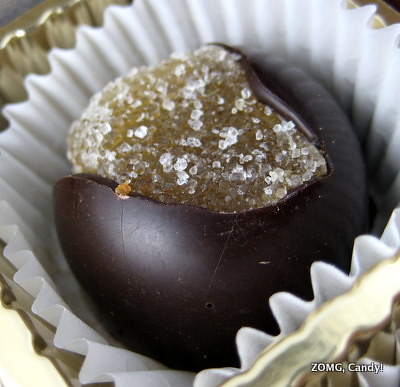 Crystallized Ginger featured a single generous chunk of sugar-crusted crystallized ginger nestled in a chocolate bed. The ginger was soft with an instant give, which contrasted nicely with the snappy chocolate.

The ginger was sharp and spicy, as it should be, but not overpoweringly so, which I appreciated. Ginger isn’t one of my favorite chocolate accompaniments, but here it was tempered enough by the chocolate to work for me. 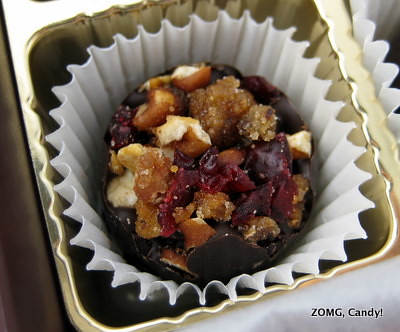 Cranberry-Pecans was a mix of chopped pecans mixed with dried cranberries. I loved the pecans, which were lightly caramelized. They brought a hint of extra sweetness, crunch, and crisp nuttiness.

The cranberry was mild and contributed just a hint of sweet and sour, but the pecan was the star here. And it shone – this was my favorite piece of the collection. I thought it was better than the bark version, thanks to the intense pecan density. 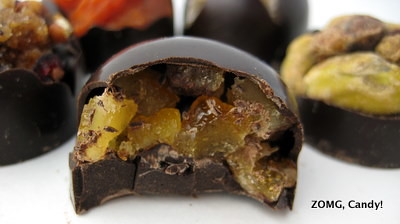 Candied Orange Peels was a shiny chocolate dome filled with chopped candied orange peels. There were two in my set. One had peels that were moist, soft, and sweet, while the other’s peels was drier, stiffer, and not as sweet.

It tasted like a toned down version of their Chocolate-Covered Orange Peels. The flavor of the peels was mostly that of citrus oil and orange zest, which paired well with the chocolate. 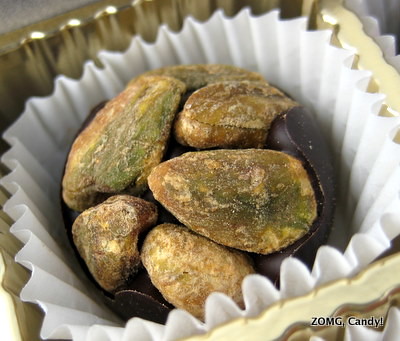 Pistachio was chock-full of whole pistachios. They were dry and extremely nutty with a strong saltiness. I felt like they overshadowed the chocolate a bit, as their nutty flavor was quite strong.

I enjoyed these chocolates, but I prefer Hedonist’s truffles, which are better at showcasing their mastery of crafting creatively flavored ganaches. The Fruit and Nut Collection is more about showcasing pure chocolates and pure ingredients. They were all tasty, but I find the truffles to be more exciting.

One exception, however, was the cranberry-pecan – that was a standout OMG. The rest get Os. And ooohs for being so pretty.

Thanks to Candy Yum Yum, I now know how Consumer Reports ranked fancy chocolates in their own tasting: Norman Love...