I picked up these the Hebert’s Fully Loaded Dark Chocolate with Margarita Lime Filling and with Apple Cider filling after my chocolate party, thinking, oh, Hebert’s! They were a hit at the chocolate party. I bet these will be tasty. I was quite wrong, and painfully so.

The Dark Margarita Lime bar was quite attractively packaged. A well-designed outer wrapping, with a pretty, striped gold foil around the bar itself, which was also pretty, dark, and glossy. Doesn’t it just look delectable in this photo? 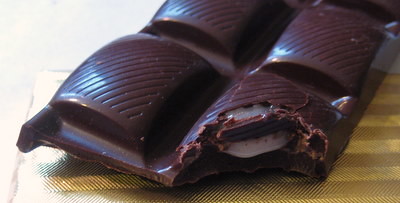 But biting into the bar. Ugh! The dark chocolate was way to sweet and cloying. The texture was creamy but had a poor snap. And it was brittle! When I picked it up from one end, the other snapped right off. The filling had no taste whatsoever; it was just generically sweet, sugary, and syrupy. There was no lime, no orange liqueur, no tequila, and no flavor. If you’re going to call your bar Margarita Lime flavored, it should at least have some citrus notes. All I could taste was too-sweet chocolate and too-sweet filling. A —.

The Dark Apple Cider bar’s filling (which looked identical to that of the Margarita Lime) did taste like something. I wish it didn’t, as its apple cider flavor has earned this bar the distinction of the worst chocolate bar I have ever tasted. There’s a reason why you don’t see apple-flavored chocolates or chocolate-covered apples around much. The taste combination just does not work.

A —, of course. The worst part about this bar was that the flavor lingered in your mouth even when the bar has long been swallowed. And the longer it lingered, the more I hated it. I’d give this a negative score if I could.

I should note that not all of my friends found the Dark Apple Cider as offensive as I did, but no one exactly liked it (if they did, I don’t know if I could be friends with them anymore; my hate for this bar is that intense), so really, don’t waste your money.

Gingerbread house making can be a fun way to flex your creative muscles during the holidays. I've made two this...