I spent the latter week of my spring break in Maine and managed to nab a factory tour of Haven’s Candies, which was definitely one of highlights of my break. Though I’ve taken tours of the Jelly Belly and Scharffen Berger factories, I’d never gotten anything as up close and hands-on as my tour of Haven’s. Andy Charles, the president and owner, and Art, our tour guide, were both extremely friendly, kind, and eager to share their knowledge and love of candy with my friends and me.

Haven’s has been making handcrafted candies in Maine since 1915, and even today much of their candy production process is still done by hand. As Andy put it, it gives their candy soul. On the day we visited, staff members were feeding salt water taffy into their decades old candy wrapping machine, running pretzels under one of their two enrobing machines, and making molded chocolates. 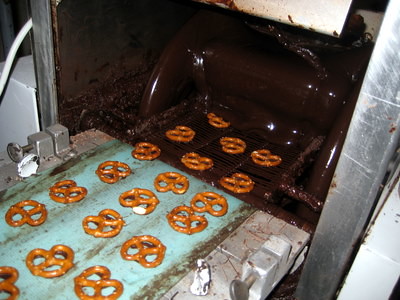 We got a lesson into how they make the cream centers of their chocolates: a mold is used to press shapes (hearts, ovals, circles, etc.) into a tray of starch, the cream in liquid form is poured into the indents by hand, and the creams are cooled to solid state before they’re removed from the starch, dusted off, and run through the enrober, where they go under a chocolate waterfall. The creams are made with inverted sugar, which causes the solid creams to turn to the proper cream consistency (or to a liquid in the case of cherry cordials) after they’ve been enrobed. Pretty nifty! Haven’s finishes each chocolate by hand with a little swirl or other decorative touch so that they can be distinguished from each other.

Art and Andy also showed us how their molded chocolates are made and colored (by painting the mold with dyed cocoa butter before the molds are filled) and then let us take turns making chocolate bars. We got to eat a bar that didn’t pass their quality control inspection (there was a tiny little indentation on the edge that I never would have noticed). Usually imperfect bars are remelted and reused, as is unsold holiday candy. After every Easter, they gather all the unsold bunnies and have a little memorial service before the bunnies get remelted. 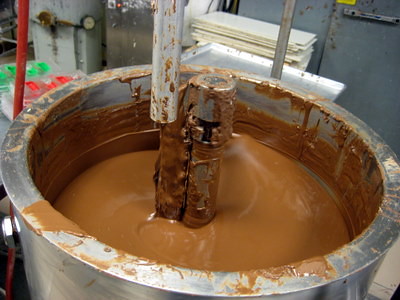 I found their milk chocolate to be quite good. It’s somewhere around 25-30% cacao and is of what I call the “European” taste, meaning that it doesn’t have the sour tinge of Hershey’s. It was extremely creamy without feeling heavy and had a nice, not too sweet finish. In fact, I found the finish of their dark chocolate (60% with a pleasantly complex duskiness) to be sweeter than that of their milk.

The best part of the tour was the end, when we emerged behind the counter and were told we could try whatever we wanted. There had to be around a hundred different chocolates to choose from, not to mention the slices of fudge Andy cut us. I personally don’t really like eating fudge in general because it’s so sweet, but I could tell that theirs was good quality. It was smooth and not at all grainy, probably because Haven’s makes it from scratch. They also make their own marshmallow and caramel on site. 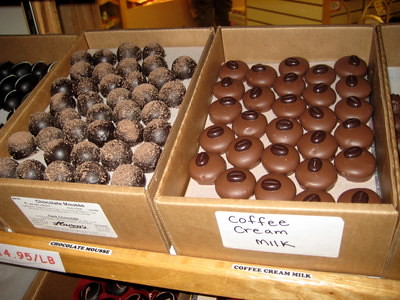 Art was patient enough to explain some of their more oddly named candies, like the checkermint cream (a wintergreen), Bangor taffy (a stiff caramel dusted in confectioners’ sugar that’s a Maine treat), and the Needham (I’ve since forgotten what it was, but it sounded tasty enough for me to buy one). And, best of all, he listened to me describe my search for dark chocolate-covered honeycomb that would resemble the Dark Sponge rather than the styrofoamy angelfood candy version before giving me one of their molasses chips to try. Success! It wasn’t quite the same as the Dark Sponge, as it was more like toffee than like honeycomb, but it had the little holes, and it was delicious! I bought a half-pound box of Haven’s chocolates to take with me: 7 different chocolates, the rest all molasses chips. I should have bought more, as I’ve already demolished most of them.

If you’re ever in the area, definitely stop by Haven’s. You can schedule a tour if you have a large enough group, or you can peer through windows and watch from all of two feet away if you don’t. Their chocolates are really reasonably priced at $14.95 to $16.95 a pound, making them the See’s of Maine, I think. If you won’t be in Maine anytime soon, they do have an online store and a monthly giveaway contest on their website. A ZOMG! for the generous tour, and a big thanks to Art and Andy for making our visit so pleasant and delicious.