I bought these Haribo TropiFrutti somewhere in Spain. I saw them in lots of shops in Europe, but I don’t think I’ve ever seen them in the U.S. 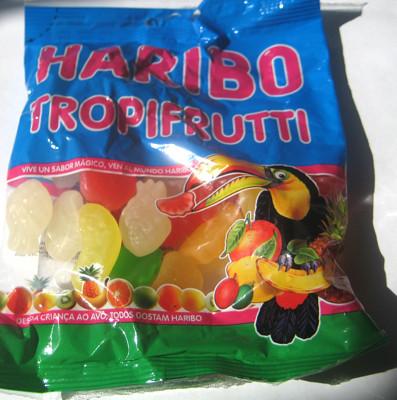 The texture of these really sets them apart. They have this weird shell that’s hard to the touch and sort of tough to chew. It reminds me of the crust that forms on chewy candy that’s been left out to dry up. The gummi inside is soft, and when they TropiFrutti are eaten, they textures mix together.

They come in six colors and a variety of shapes – fruit shapes plus toucans and palm trees. We’ll start at the top of the photo and work our way down. 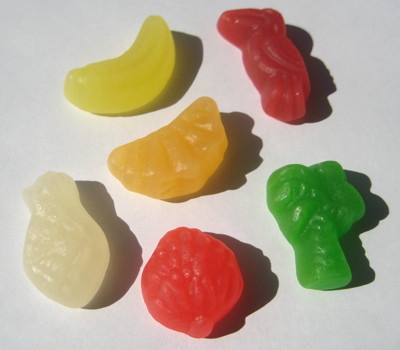 Banana is yellow. I don’t particularly like banana flavored candy. The distillation of fresh banana flavor into artificiality just doesn’t appeal to me. This one tasted of sweetness, plus the scent of bananas. It did not appeal to me.

The dark red toucan also came in the shape of a bunch of grapes, so I thought it was grape. But when I tasted it, it carried a raspberry-like seedy bite. I’d guess that it was raspberry, but there’s a picture of a passionfruit on the wrapper, so maybe it’s passionfruit?

The orange wedge tasted mildly orange with a bitter bite. It was weird and soapy/grassy rather than zesty. Yuck.

The white pineapple tasted just like pineapple, with an authentic core-y bite.

The pink strawberry carries a mild berry flavor. I don’t associate strawberries with tropical-ness, but at least it’s not weird tasting.

Last but not least, the palm tree. I think it was kiwi? It had mild grassy notes and a sweet flavor that I identified as kiwi (though maybe only because there was a kiwi on the bag).

All in all, I’m a little conflicted about what rating to assign this. On the one hand, I didn’t enjoy most of the flavors and disliked the texture. On the other hand, I managed to eat most of the bag, though just a few at a time per sitting over the course of a couple of months.

In the end, they get a —. I decided it was telling that I couldn’t manage to stomach eating more than a few at a time.

I've never had the pleasure of eating a fresh mango in tropical Asia, but I can imagine just how scrumptious...