This Hammond’s Crackle Crunch bar was a gift from a friend, along with their PB&J Sandwich bar. It was described as “milk chocolate with raspberry popping candy”.

This bar was segmented into 2 rows of little striped domed rectangles. It broke easily along the segments, and the chocolate had a nice snap when I bit into the domes.

The popping made for a fun sensation, like a jumping bean party in my mouth. Every once in a while, a pop would hit the back of my throat, which definitely woke me up.

The first time I tasted the bar, I thought the raspberry flavor was overwhelmingly, dominatingly artificial and off-putting. Revisting the bar a couple of days later, however, found a more muted berry sweetness that was much more tolerable and let the chocolate’s caramel cocoa flavors come through.

I’m not sure if I just picked an unusually strongly flavored segment on first taste, or if letting it sit opened (but in a Ziploc bag) for a couple of days let the artificial dissipate, but it was much improved/palatable the second time. 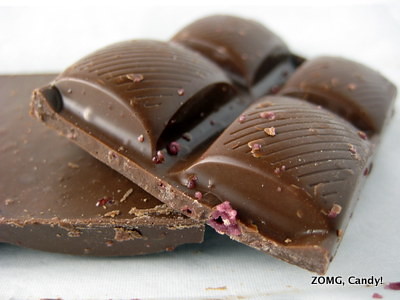 Funny that the wrapper promotes the bar as a “classic confection” – carbonated candy in milk chocolate doesn’t strike me as super classic, but I’m not a candy historian. An O.