Like many random chocolate bars that I wind up buying for review, this Blackberry and Cocoa Nibs bar from Hachez wound up in my cart because it was on sale at Wegmans.

Alas, Wegmans should have just taken it off the shelves instead of selling it at a discount, as my bar arrived covered in bloom (though, to give Wegmans the benefit of the doubt, there was no marked sell-by date, so it’s on-sale-ness could have been a coincidence that was unrelated to its condition). 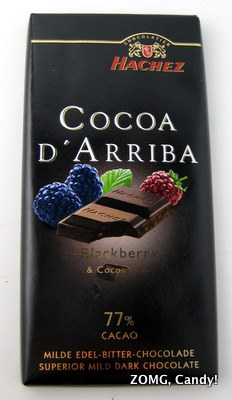 In its bloomed incarnation, the 77% cacao bar was snappy, dry, and crumbly. Bright berry flavors came out in the middle of the flavor progression before giving way to a cocoa bitterness from the added nibs.

I decided to microwave a bit of the bar, to see if I could reconstitute some of the flavors by messing with the texture. I heated a couple of rectangles until their undersides were melted but their top halves were still solid. 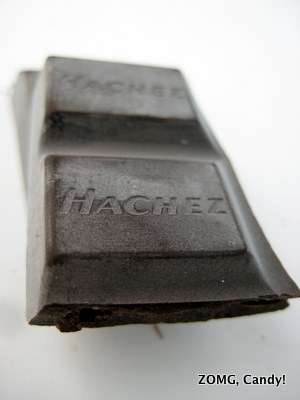 The texture of the chocolate went from unpleasantly dry to a smooth – though not creamy – melt. The sweet and tart taste of berries came through much more strongly and sang as a top note over the slight bitterness brought by the grains of cacao nibs.

I don’t think I can fairly rate this bar because I got in imperfect form, but the tasty melted version made me think I’d like it in its normal state. I’ll have to try it again sometime. For now, it gets at least an O. And Wegmans gets a finger wag.