A couple of weeks ago, the folks at Gud Fud emailed me asking me if I’d like some free samples of their stuffed marshmallows to review. Having already read about their marshmallows on CandyBlog and CandyAddict, I eagerly said yes to my chance to give them a shot, expecting a dozen or so marshmallows to show up in the mail. Instead, I ended up with 1600 marshmallows, 800 of their chocolate stuffed and 800 of their fruit jelly stuffed.

Clearly Gud Fud and I have differing definitions on what constitutes a “sample.” 800 of them were left in my residential college master’s office, and the rest I am slowly parceling out to friends. More on that later. But for now, I’m sure you’re all wondering how they taste. The answer is, it depends. If you like marshmallows, you’ll like these. If you don’t, you won’t.

No matter where you stand on marshmallows, you have to admit that the packaging on these guys is adorable, if a bit confusing: English letters, German umlauts, and Japanese characters make them a worldly looking product. If you think too hard about the cartoons, they get a little zombie creepy (why are there holes in their heads that allow their innards to seep out?), but overall, cute. 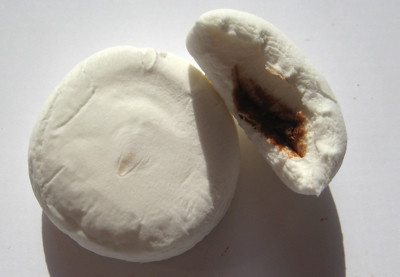 The marshmallows are pretty standard. The immediate outside is a bit dry and dusty, like what would happen to a regular jet-puffed marshmallow if you left it outside the bag for a while, but the insides are soft and squishy. They just taste like your average store-bought marshmallows. The chocolate insides aren’t strongly chocolatey – the flavor is more Tootsie Roll than chocolate bar – and it has a frosting-like taste and texture.

The fruit jelly stuffed marshmallows have similarly cute zombie-fied characters on their packaging and come in three flavors: grape, strawberry, and orange. Unlike the icing of the chocolate stuffed Gud Fud marshmallows, the fruit fillings in these are sweet, gooey, translucent gels.

The fruit jellies alone were great – bright, sweet, and true to their monikers. I just don’t know about the combination of the fruit and the marshmallow. There’s a reason why we eat peanut butter and jelly sandwiches, not marshmallow fluff and jelly sandwiches. I didn’t actively dislike them (though some people who I shared these with did), but I didn’t especially enjoy them either.

Overall, the Gud Fud guys get an O from me. I like marshmallows – whenever I have the chance to make s’mores over an actual flame, I’ll eat marshmallow after marshmallow, both toasted and untoasted, until I feel sick to my stomach – so I liked these too, but I didn’t love them. I wish I liked them more, as I have so many of them, but at least I don’t dislike them. They’re pretty nice in hot cocoa, and I’d love to try them toasted someday.

If you want to check these out for yourself, Gud Fud offers “free” samples on their website that’ll cost ya $2.95 in shipping and handling for 10. Or, reader-friends, I can parcel some out to you as well. Leave a comment here with your email address. I’ll give you a mailing address for me, and if you send me a self-addressed and stamped envelope, I’ll mail you one of each flavor and hope that they don’t count as bulky objects that require additional postage. And I’ll do a proper giveaway at some point too, so stay tuned!

Edit: All marshmallows have been given away, mailed off, or eaten by myself and friends, so my mailing offer is now closed. Hope those who got them enjoyed them!