Gail Ambrosius (yes, that’s her real name) is a chocolatier with an eponymous shop in Madison, Wisconsin. There, she makes amazing chocolates (with amazing descriptions; her copy writer is definitely earning his/her keep), mostly with single-origin chocolates from South and Central America. 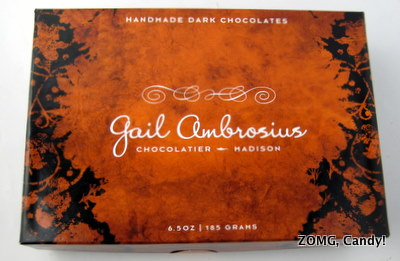 I was offered the chance to try some free samples, and boy was I glad that I took that offer! Today, I’ll cover the more normal ones from her Classic and Tea collections, and next Monday, we’ll hit up the Adventurous Collection. 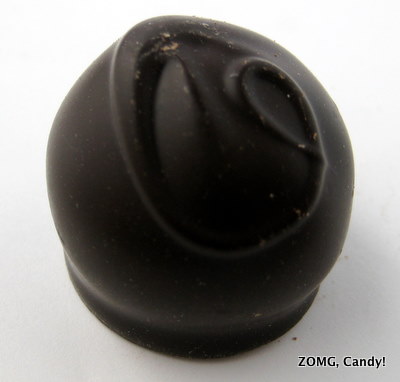 Lucille’s Vanilla was the only unadorned chocolate of the bunch, a simple dark chocolate shell with a chocolate ganache inside. The truffle guide that came with the box said it would taste “like a rich spoonful of homemade chocolate pudding.”

The outer chocolate shell had a pleasantly sharp snap, while the ganache was creamy with a luscious, thick melt. 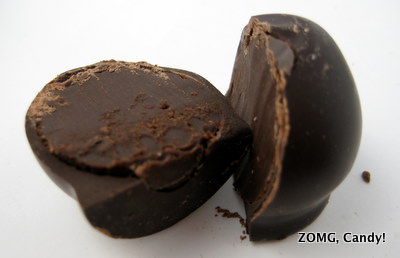 That ganache was the perfect embodiment of chocolate flavor. It was thick and rich and decadent, and it had a lingering finish of pure cocoa. Isn’t it amazing when something so simple can be so delicious? 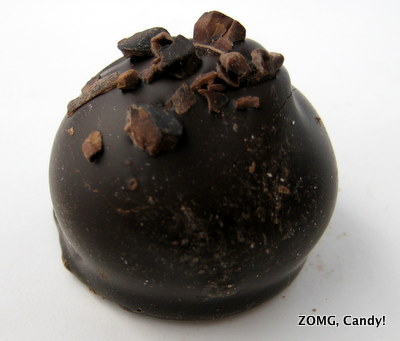 Raspberry was topped with a sprinkle of cacao nibs. The guide says that it’s a combination of 36% milk chocolate, 65% dark chocolate, and raspberry puree.

The raspberry gave the ganache a sticky, pasty texture, while the cacao nib topping added a nice crunch. The filling tasted super bright and was bursting with fresh raspberry flavor that paired well with its chocolate shell. It was very sweet, but because it was a natural fruity sweet, it was desirable rather than off-putting. 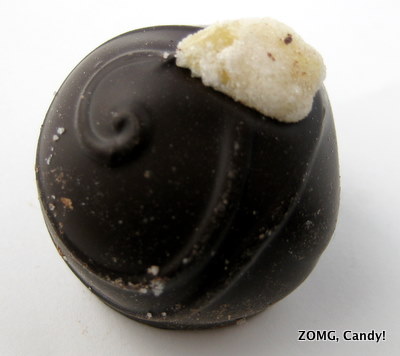 Cognac wore a cap of candied ginger. It tasted of fruity booze with a spicy ginger finish. The ginger flavor is strong and easily identifiable, while remaining understated so as to be harmonious with the chocolate. 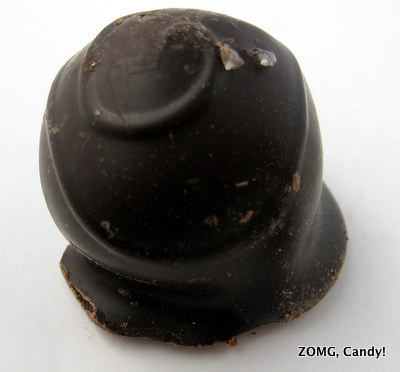 Cointreau was originally topped with candied orange peel, but mine fell off in transit, so mine looks like it has a couple of sprinkles of chunky sugar or something. What little was left of the candied peel added a slight grain to this truffle’s taste experience.

It tasted brightly of orange. Such a strong citrus presence would be overwhelming if paired with a lesser chocolate, but the strong dark chocolate shell tempers the citrus flavor quite nicely. 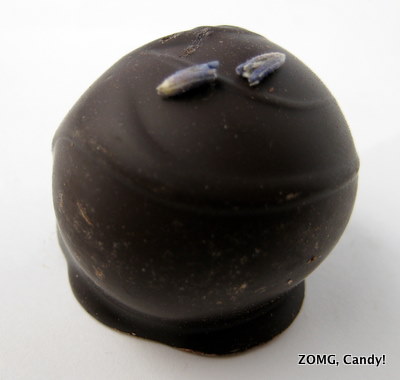 Earl Grey had a pretty little sprinkle of lavender buds on top. The actual Earl Grey tea flavor was mild and just brought a light floral/lavender undertone to the chocolate. 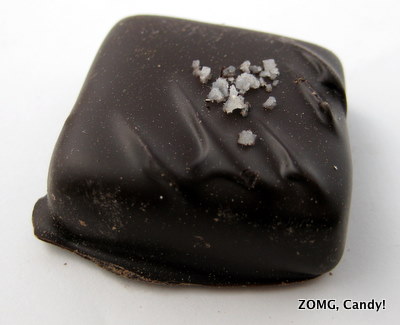 Caramel Sprinkled with Grey Salt was a square of caramel dipped in chocolate and topped with a few grains of fleur de sel. It’s a sweet that’s now made by many confectioners. I now know that Gail Ambrosius makes one of the best versions.

The caramel was wonderfully complex with deep molasses notes. It was smooth and buttery on the tongue if I let it melt and chewy but not teeth-sticky if I chomped it. The sea salt crunched a bit when I got a big grain, and it really set off the sweet complexity of the caramel.

Gail Ambrosius’s truffles were exquisite. The Lucille’s Vanilla, Raspberry, and Caramel were my favorites (yes, that’s half of the ones I just wrote about, which just further underscores how delicious these were) and get ZOMG!s.

The Cognac gets an OMG, while the Cointreau and Earl Grey get Os mostly because I don’t really like floral flavors and have never been much for orange and chocolate combos, and they therefore got overshadowed by their truffle buddies.

Come back on Monday for Gail’s adventrous collection!