I picked this up at Sainsbury’s in Cambridge after I read Terry’s review of it on The Chocolate Review, and I wasn’t sorry. I bought them in a pack of six and brought them home to give out as “I remembered you while I was abroad!” gifts. The big six-pack contained six individually wrapped bars, all in posh matte wrappers with an eye-catching black, green, and silver design. 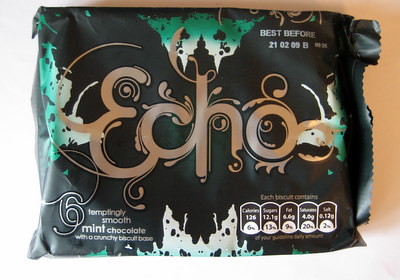 They are billed as “temptingly smooth mint chocolate with a crunchy biscuit base.” Basically, they’re a chocolate cookie base topped with aerated mint chocolate, all covered with milk chocolate. Each bar is imprinted with Fox’s Echo on the top. 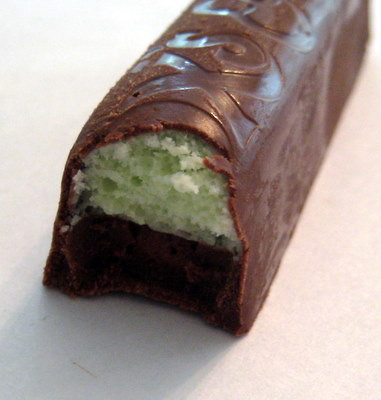 The bar has a super strong mint smell, but it doesn’t taste as piercingly minty as its scent would suggest. Think more muted mint chocolate chip ice cream than Altoids or toothpaste. The chocolate cookie base was super crisp, almost a little too crunchy for my taste. The aerated mint chocolate melted creamily and mingled well with the chocolate coating and cookie base. Overall, I felt the bar was a little too sweet. It’s pretty small, and I only ate it about a third at a time. An OM if I were still in England and could buy more.