I was excited/mad when I read this Jezebel post about Mars’s new Fling bar. Excited because my press packet and free samples were in the mail; mad because they were still in the mail and ugh, if I’d already reviewed them I might’ve been able to nab a link from Jezebel, like CandyBlog and CandyAddict did, which would’ve been huge free publicity for this site! Oh well. I still got to try them, at least. And I got to page through the hilarious/horrible press packet they came with. 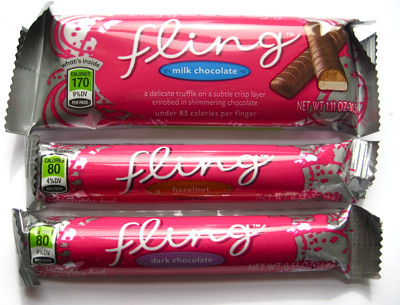 Fling chocolates are marketed as portion controlled chocolate indulgences that are “naughty but not too naughty.” Now, I’m all for portion control, but I hate the way Mars went about marketing these guys. Here are some of my favorite quotes from my press packet, with my thoughts in italics:

Those press notes bothered me far more than the hot pink wrappers or the sparkles in the chocolate (which I thought were kind of neat) because they embody how society can dictate how women should behave and eat and look. On a non-candy note, Frito-Lay is running a similarly annoying and sexist promotion for Baked Lays, SmartFood, and Flat Earth chips. 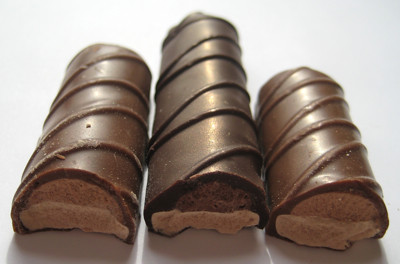 But that’s enough of my feminist rantings. How do the Fling bars taste? Not bad, actually, but not great. They come in three flavors: from left to right, milk chocolate, dark chocolate, and hazelnut. The milk chocolate is described as “a delicate truffle on a subtle crisp layer enrobed in shimmering chocolate,” and the same could describe all three bars. I initially thought the “crisp layer” was like the inside of a malted milk ball, just minus the malt flavors. After perusing the press packet, I learned that it’s a bit of meringue cookie. The same meringue is in all three bars and is consistently light, airy, and crisp. The chocolate literally shimmers, thanks to some added pixie dust (a.k.a. mica). Yes, it’s a bit irritating to think that Mars made the chocolate SHINY! to appeal to women, but I’ll admit it – I like shiny things. I thought the shimmer was neat, it wasn’t nearly as horrid as it looked in the press photos Mars sent me (see below), and it didn’t affect the taste at all, so why not?

The truffle of the milk chocolate bar reminds me of a 3 musketeers’ nougat filling. It had a slightly dairy finish, but there was something a bit off about the flavor, perhaps due to PGPR being listed in the ingredients.

The dark chocolate had a slightly deeper cocoa flavor and a sweet finish. It didn’t taste as dark as it looked. The ingredients for the dark bar didn’t have PGPR, but it did have “chocolate processed with alkali,” which is where the dark coloring came from.

I was most excited about the hazelnut, as chocolate and hazelnut are a great flavor combination. Unfortunately, the hazelnuttiness was far too light and not enough to really distinguish it from the milk bar. And it has more PGRP. Yay!

Overall, I give these an O. I really enjoy the novelty of the meringue cookie, but I wish the chocolate was nicer. Better chocolate and more nuttiness to the hazelnut could’ve pushed these up to the next rating. As for their marketing… Right now they’re just being test marketed in California (others can buy online). We’ll just have to wait and see how much further they get.