My friend Neil, who’s currently living and blogging in the Netherlands, brought me a generous assortment of Dutch goodies when he was back in the states over the holidays. Included among the treats were these Droste Orange Pastilles.

The packaging is unusual – a hexagonal paperboard tube with an inner sealed roll of silver. The chocolates’ shape is unusual too: large, flat disks, each etched with the Droste logo.

I think the disks were a good chocolate delivery device. They were the perfect shape to place flat on the tongue and let melt against the roof of the mouth. 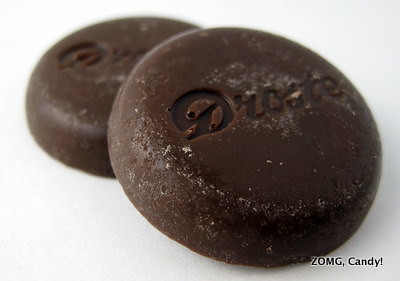 With chocolate and orange, it’s hard to avoid Terry’s Chocolate Orange comparisons. This was far better. It tasted very strongly of orange oil with a lot of citrus zestiness, far less artificial than Terry’s version.

I enjoyed it in small amounts, but any more than a disk or two, and the chocolate’s sweetness became cloying, with that cloy lingering in the finish.

I give it an O. I liked it, but the mounting sweetness keeps it from being addictiable.

Yes, I just made a mash-up word.