Oh I’m sorry, you wanted more than that? Okay. I got a free sampler box of David’s Signature Beyond Gourmet Jelly Beans?(available online from Amazon/Oregon Trail Foods),?and it included a bacon flavor. Which I will review last to make sure you keep reading. 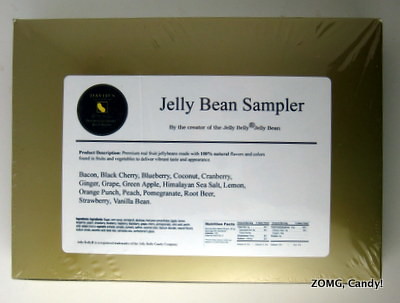 The David behind the beans is the David Klein who invented Jelly Belly beans but sold his share of the company before they got big. Like their Jelly Belly counterparts, the Beyond Gourmet beans are packed with flavor in the shell and the jelly center.

I’m going off my Jelly Belly memory here, as I didn’t have any handy for a direct comparison, but I think the Beyond Gourmet beans were softer in texture.

I could easily squish them between my fingers. As I chewed them, the jelly center consolidated into a soft, grainy mush that was vibrant and full of flavor. 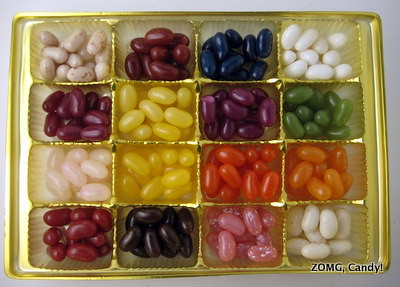 Black cherry was sweet and brightly fruity with just a hint of tartness and not a whiff of medicinal notes.

Blueberry did an incredible job of capturing the essence of real blueberries, like blueberry yogurt without the dairy notes and with the tartness turned up.

Coconut was sweet to start, then took on the light creaminess of coconut milk. I didn’t get any nuttiness, but the flavor was pleasant enough, though I felt it was too mild and faded into sugary sweetness too quickly. 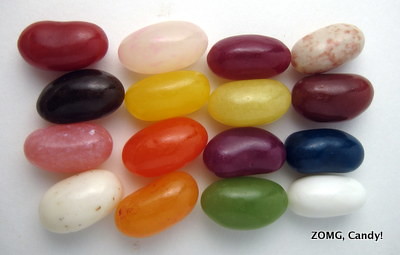 Cranberry was sweet and juicy and tart and tangy. I actually would’ve pegged it as pomegranate, as it lacked the tannic bite of cranberry. Either way, it was enjoyably flavorful.

Ginger was incredibly strong and nicely captured ginger’s spicy bite. It was really true to form, like eating raw ginger, and I found it too intense to finish.

Grape went the familiar popsicle route but managed to keep it sweet and fruity but not medicinal (though rather artificial). 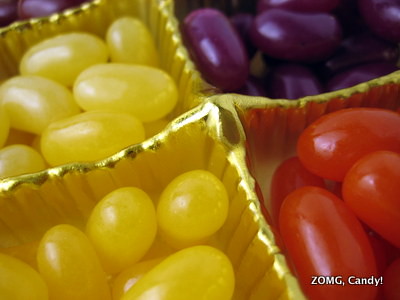 Green apple was lightly tart with a grassy note that danced on its edge and set it apart from the standard Jolly Rancher take on green apple.

Himalyan sea salt was a strange choice for a flavor and was weird in execution. It was mostly sweet with just a tinge of saltiness. I was too scared to embrace the oddness and didn’t try too hard to finish it.

Lemon started like a lemon drop with a bright sourness. Then, it took on a edge of zestiness with just a smidge of pithy bitterness. It was wonderfully complex and my favorite of the bunch. 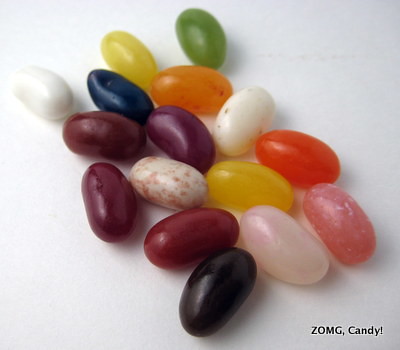 Orange punch tasted just like orange soda. The flavor was spot on, artificial sweetness and all.

Peach tasted like a peach gummi ring rather than the real fruit. It was intense and fruity, if rather artificial.

Pomegranate had a mild floral sweetness, then became tart and tangy with a tannic edge. It had an effervescence to the flavor (not actual bubbles) that was awesome. 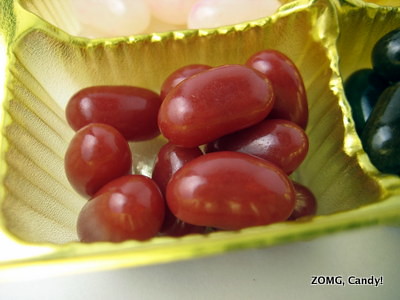 Root beer was intense: strong and genuinely sassafrassy with a bitter edge. It was too much for me, but real root beer lovers would enjoy it.

Strawberry was neither mild nor floral. It had an intensity to its flavor, like strawberry jam with an herbal, grassy note to the finish. 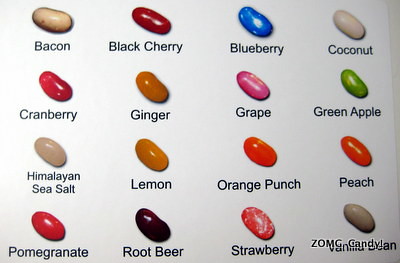 And now, the moment you’ve been waiting for: bacon was salty, smoky, and meaty with a maple syrup sweetness. The flavor was right but the jelly bean texture combined with the taste of bacon was too weird. I couldn’t finish it due to the cognitive dissonance.

Overall, these beans are great! I can’t reiterate enough how vibrant and intense the flavors were – so much tastiness in such small packages!

I could’ve done without the bacon and Himalayan sea salt, but they were attention-getting in their novelty. I’m glad I tasted them, so they don’t merit the — rating, but once in a lifetime is enough for me.

While ginger and root beer weren’t to my taste, they were faithful interpretations of those flavors and get Os, as do coconut and vanilla bean for their relative mildness. The rest of the beans (all the fruit flavored ones) get an OMG for their awesome intensity, and lemon earns that extra Z for a ZOMG!