On Monday, I covered the Angell Crisp bar. Today, I’ll review its darker (but still fair trade and organic) counterpart, the Dark Angell. It was comprised of “dark chocolate, rich cocoa, and [an] almond center.”

I’ll give it style points for the name, which conjures up an expectation of sinful deliciousness. Unfortunately, the bar fell short of my expectations.

My bar showed a hint of bloom, but it wasn’t enough to have a noticeable impact on the taste or texture. The thin dark chocolate shell was brighter and fruitier than the milk chocolate of the Angell Crisp, which actually made the dark chocolate seem sweeter. The dark also had diminished cocoa flavors compared the milk.

The filling was a mix of crushed almonds and a chocolate ganache that tasted like the same chocolate of the shell. The almonds were mostly smashed to gritty smithereens, though I did come across at least one slightly larger chunk (visible in the below photo) that managed to retain some toothiness.

The almonds lacked crunch. Instead, they were almost chewy, like they’d gone stale or simply taken on moisture. Perhaps the small bits had too high a surface area to volume ratio? They brought minimal nuttiness and instead served to dry out the bar and its mouthfeel. 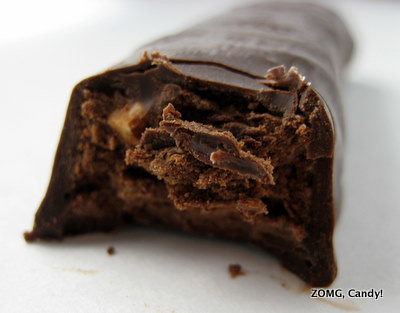 I liked the chocolate component to this bar, but it went all wrong with the almonds. Those nuts were broken into too small pieces and lost everything that’s great about nuts in chocolate: the added flavor and crunch factor were gone. A missed opportunity and an O.