Dagoba was my introduction to upscale chocolate. It was a big part of my first chocolate tasting party, when I first really tasted chocolate, which is why I have reviewed as many Dagoba bars as I have. That and they’re sold at the campus convenience store, where I used to have $150 to spend there as part of my meal plan, back when I was on a meal plan. And they come in a ton of flavor varieties, so there are several types to review. Here are two more. 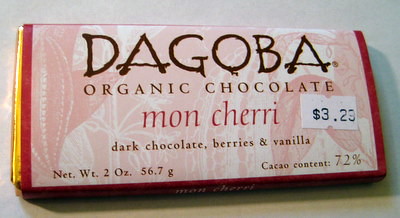 The Mon Cheri was a 72% dark chocolate with berries and vanilla. It was a smooth bar with a creamy melt, which is surprising for a 72%. I was also a little curious about the 72% part – if I remember correctly, most of Dagoba’s super dark bars are 74%. 72% would mean they have a second dark base? 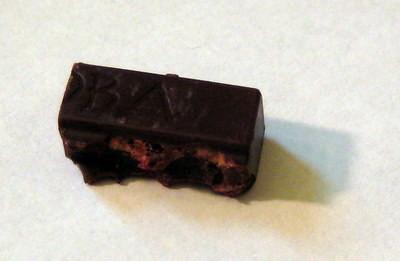 The berries are tiny bits that stud the bar. Based on the color of the bits and the name of the bar, I’m going to guess that cherry was the predominant berry present. Chocolate and berry is a nice flavor combination, though the addition of fruit tends to overwhelm the natural notes of the chocolate. An OM.

The Super Fruit bar I disliked on principle. Just take a look at the wrapper, and see if you can guess why. 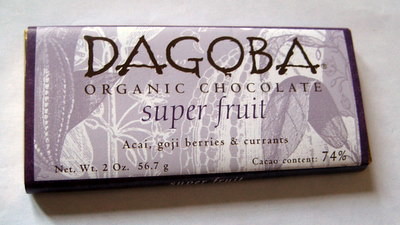 Any ideas? It’s a 74% dark bar with acai, goji berries, and currants. In other words, it jumps on every hype train! All it’s missing is pomegranate seeds and giant boasts about antioxidants splashed across its wrapper. For the record, I don’t buy into the “dark chocolate is better for you because it has more antioxidants” hype. You’d need to eat a ton of it to get any real effect, and eating a ton of any kind of chocolate is bad for you.

All the hype aside, this bar isn’t bad. It tastes a lot like the Mon Cheri – like dried fruit plus good quality chocolate. I thought I noticed a slight saltiness around the dried fruit bits, but it was so faint that I couldn’t be sure. Another OM.

Basically, Dagoba makes good, solid bars. I don’t give them Os because they’re so much better than your standard Hershey’s bars (even though Hershey’s owns Dagoba), but they also don’t stand out enough to warrant higher ratings. The way I see it, they’re great to taste your way through, but I’ve yet to find one that I’ve become attached to enough to buy a second time.