Today marks the finale of Dagoba Chocolate (BUY!) Week, and I’ve saved the most interesting for last! 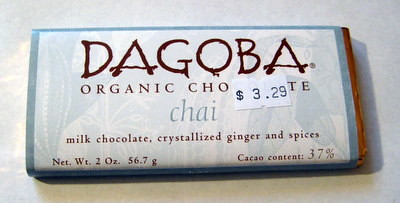 The Dagoba Chai is 37% milk chocolate, crystallized ginger, and spices. That last “spices” bit is annoyingly generic, and the ingredients list isn’t much help. There “spices” is replaced with “essential oils.” 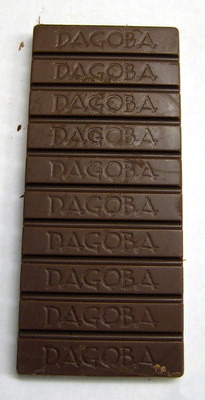 When I ate this bar, I couldn’t figure out what the spices were because the ginger taste was incredibly strong. It overpowered everything. I like the essence of ginger in cooking, but I can’t stand ginger itself, probably because as a kid I accidentally ate too many slices of ginger out of our family stir fries (always an unexpected and unpleasant taste sensation).

Still, there was something about this bar that was intriguing, and it kept me reaching for more pieces. I never actually enjoyed it, however, so it only gets an O. At the chocolate party, this came in 12th (out of 13) with a score of 2.57/5. It was interestingly polarizing. Lots of 1s and 2s, but also a raving 5 and a few 4s. Comments ranged from “wtf funny flavor,” to “niceish – strange” to “can’t really describe it.” A few called it medicinal, which is understandable (anyone else forced to drink ginger root tea as a kid?).

The roseberry was the one I was most excited to taste. A dark bar (59% cacao) with raspberries and rosehips – sounds delicious! And it was pretty good. I loved how pretty the bar was. The pink bits of raspberry looked gorgeous against the dark, glossy bar.

I didn’t taste any rose notes when I sampled this bar, but the floral scent is definitely there. The raspberries add a gentle fruitiness that I wish was a little more noticeable. They also added a slight grit to the bar that I could have done without. An OM from me, and a tie for 5th with 3.533/5 from my friends.

Overall, I really enjoyed these Dagoba bars, even if none got a review above an OM. I think their ratings may have been skewed a little low because I tasted them with a bunch of other bars, some of which were less subtle and more interesting. The dark 59%, the hazelnut, and the roseberry were all on the brink of earning that extra G, but I pulled back because Dagoba bars are so pricey. The ones I bought cost $3.29 at the overpriced campus convenience store, but even online they’re $3.00 a bar.

I liked the Dagoba chocolate bars enough to want to eat my way through all the different varieties, though that would quickly get expensive. Dagoba will definitely make another appearance at my next chocolate party.