These Cranberry Bog Frogs have been lurking in my candy stash for a while now. I know I received them as a gift from someone, but alas, I can’t remember who gave them to me. If it was you, thanks!

There were three Frogs in my pack. Each was pleasantly starfish-lumpy shaped and decorated with a single dried cranberry. It had a few too many appendages to resemble a frog though – unless it’s the “WARNING! Pollution here!” kind of frog. 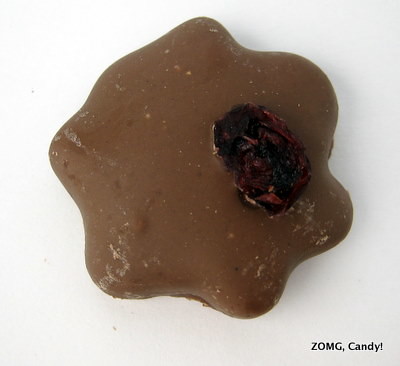 The milk chocolate coating was quite nice, with light hints of cocoa and malt. The caramel inside was sweet and creamy with a bit of butteriness. It was just sticky enough to prolong its chew and stuck to my teeth a bit.

The cashews added a bit of crunch, but, as they’re a fairly mild nut, their flavor contribution was minimal. The cranberries were great and added a vibrancy that brightened and highlighted the treat. 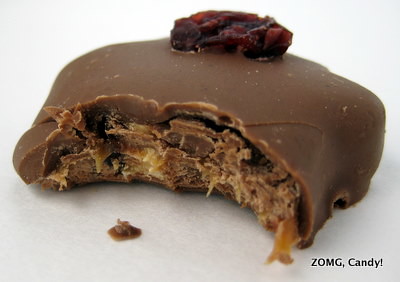 I thought these were a great mix of textures and flavors, and the addition of the cranberry was a nice, out of the ordinary twist.

I give them an OM, but with one caveat: there was a $3 price sticker on the box. I don’t think they were $1/Frog good, ?but as an “I was traveling to cranberry country and thought of you” gift, you could easily do worse!