I’m kicking myself for somehow neglecting to take a picture of these guys whole, outside of the wrapper. A shame because these Cocoa Deli pops look much better than they taste – like cute little fudgsicles! I liked that the popsicle stick was made of plastic, a nice detail. 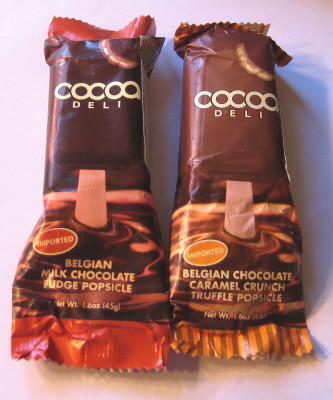 The wrappers definitely try to play up the Belgian chocolate angle. The term “Belgian chocolate” carries some cachet with it, but this candy showed that Belgian does not always equal good. 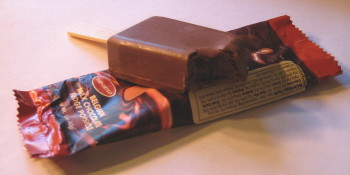 Either way, it doesn’t really matter, as the popsicle (by the way, that’s what the chocolate is referred to as on the nutrition facts panel. Serving size: One popsicle) tastes pretty much the same all the way through. A careful examination shows a thin layer of darker chocolate truffle to distinguish the two types visually, but it all tastes the same to me. It’s super rich and creamy (and also really high in saturated fat) with a soft chocolate filling in a similarly soft chocolate shell. I couldn’t taste or feel any cocao nibs in the popsicle, but 0.8% is tiny, so I guess that’s understandable. The whole thing basically just tasted of sweet and of chocolate and was overwhelmingly cloying.

The Belgian chocolate caramel crunch truffle popsicle was also too rich and too sweet. The wrapper describes it as layers of chocolate truffle (13%) containing butter toffee pieces (1%) and cocoa cookie (5%) and a caramel flavor truffle (19%). 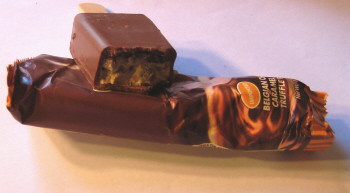 The caramel layer is lighter in color than the chocolate truffle of the fudge pop. It smells slightly duskier but doesn’t taste like caramel at all. No burnt sugar notes, just an overwhelmingly rich sweetness. Spherical little balls of cookie stud the truffle. They’re light golden brown in color and don’t look or taste like they’re made of chocolate, even though the wrapper says that it’s a cocoa cookie. Finally, there are tiny grains of toffee in the thin upper layer of chocolate truffle, but I had to really look for them to be able to identify them. I don’t think the casual popsicle eater would have noticed their presence.

These things cost only $1 a pop, and you get what you pay for. They’re cute, but they’re way too rich and don’t taste very good, unless you like to inundate your tastebuds with sugar. An O.