I got this box of Coco Keeno as a free sample from their booth at Sweets and Snacks. They were sampling all kinds of chocolate-covered things, and I asked for a box of their Coco Goldrush to take home for review. I thought they were the most delicious and unique of their offerings. 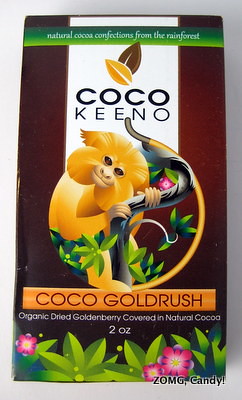 The box describes them as “organic dried goldenberry covered in natural cocoa.” I’d never heard of goldenberries before – I can’t decide if they sound magical or like a juvenile euphemism.

Apparently they’re dried gooseberries, which I’ve had before in England. I remember fresh gooseberries tasting like super tart grapes. 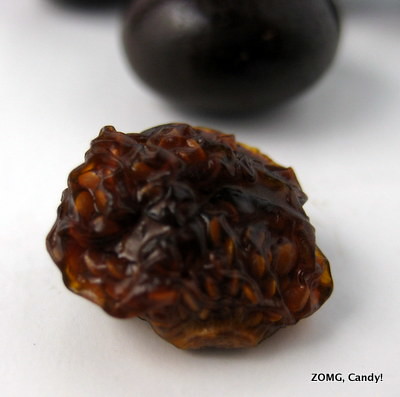 The dried goldenberries were all shriveled up. They sort of looked like giant golden raisins studded with seeds, like raspberries. 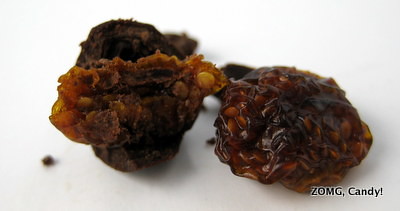 They were seedy and chewy and became increasingly tart as I chewed them, and they finished with a slight bitterness. Alone, they were too intensely sour to be enjoyable.

Covered in dark chocolate, however, they found a great flavor foil that balanced them out. The dark chocolate was dry with a light cocoa flavor that tamped down the goldenberry’s tartness. 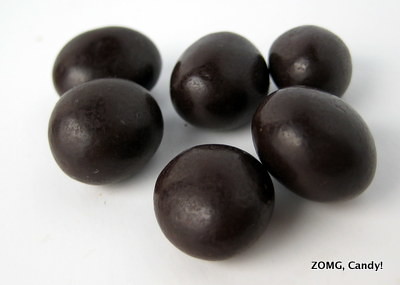 When all chomped together, these were a uniquely tasty treat. I don’t buy into all the superfood hubbub about them, but I will give them an OM.