One of my dad’s specialty, cranks-it-out-for-dinner-parties dishes is taro root with chicken. He poaches chicken, uses the resulting stock to cook sliced taro root for hours until it’s buttery and meltingly soft, and mixes in the poached chicken (pulled into thin slivers that disappear into the “melted” taro) along with some chopped scallions. It’s delicious. 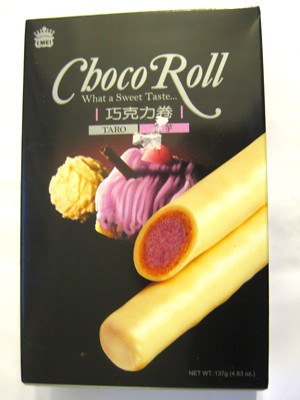 So, taro + chicken = delicious. Taro + chocolate? We’ll see. I bought this box of Choco Roll Taro solely because it was so weird! If you’ve never had it, taro is a root vegetable that’s sort of like an extra starchy, slightly sweet and nutty, purple potato.

Ever thought, “Gee, I like mashed potatoes, but I bet they’d be better with chocolate instead of gravy”? Well, some Asian person thought the equivalent for the taro. From the looks of the purple frosting and cherry covered thing on the box, the Choco Roll Taro might be based off of some pre-existing dessert concoction.

Each individually wrapped Choco Roll Taro is a pink and purple speckled taro root center inside a round wafer roll, all covered in a yellow-y white chocolate. Don’t worry – the purple center isn’t nearly as bright as it looks on the box. In fact, the mottled pink/red flecked center is rather pretty. 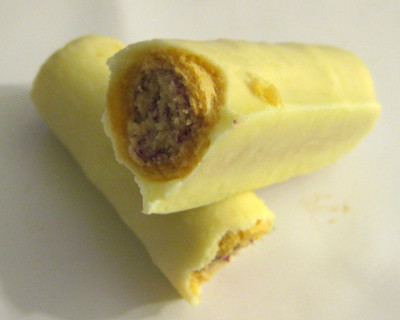 The taro center tastes like pasty, extra-starchy mashed potato with a hint of nuttiness and lots of added sweetness. The extra sweet comes through in the finish and ends on a rather fruity note.

The wafer layer is unremarkable: airy, bland, and crisp. It serves its textural and structural purpose well, at least. Finally, the white chocolate outside is kind of greasy and pretty bland. I’m not a white chocolate fan, so I have little experience in picking out flavor notes in white chocolate. It just tasted like regular old sweet white chocolate to me.

All in all, I think I’ll continue to take my taro with chicken rather than chocolate. The flavor combination is just too strange for me to appreciate, and that strangeness overrides any ooh factor that the interplay of paste and crunch and melt could have brought.

I ate half of a roll to taste; the rest of the box disappeared when I moved. I may have given it away back in New Haven, or it could be buried in my candy stash somewhere. Either way, a taste is plenty Choco Roll Taro for me. It gets a no lettered — for being harmlessly not tasty.