The last time I tried Choco Roll in their Taro flavor, it just didn’t work for me. Though my palate grew up eating lots of Chinese food, I couldn’t stand the Asian starchy root as a dessert.

Recently, I came across a box of Choco Roll in a Pudding variety. Now that’s a flavor that I can get behind! 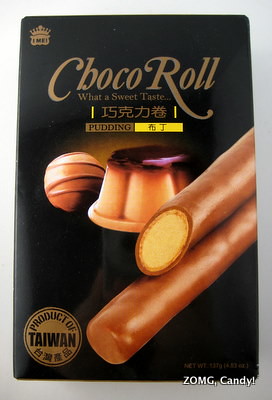 The Chinese characters for pudding are a straight phonetic translation, a clear indication that “pudding” is a Western import.

The box pictures both a milk chocolate truffle and a delectable looking flan, so I guess they took some liberties in that importing process.

The chocolate layer was quite thin. It was mild with little flavor or character and had a slight greasiness to it. 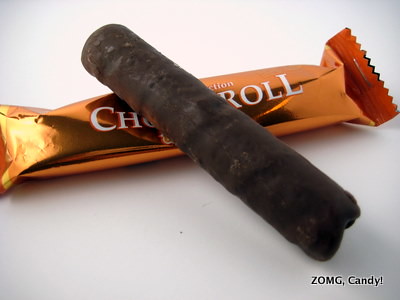 I think it was made with some sort of vegetable fat rather than cocoa butter. A look at the ingredients confirmed my hunch: palm oil and butter, but no cocoa butter.

The wafer cookie was nicely airy and crisp. Though it had the soft and easily crumbling texture of egg roll cookies, the flavor was more that of fortune cookies, minus that crunchy staleness that fortune cookies get. 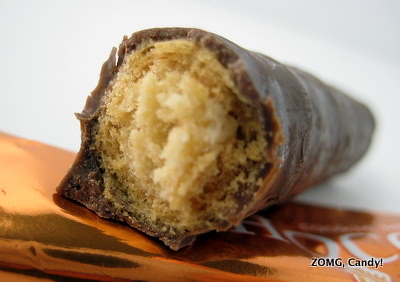 The center cream filling was rather gritty with no creaminess. It was kind of pasty and fluffy, like dry mashed potatoes.

That cream filling was mildly sweet. It tasted pretty neutrally of dairy cream and left a fatty feeling on my tongue and lips. 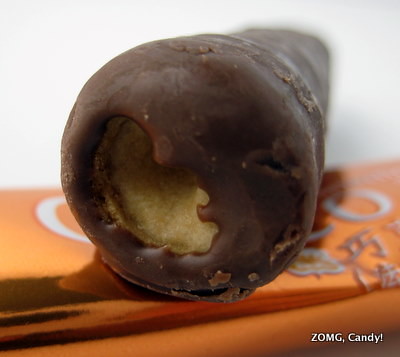 I enjoyed these more than the Taro version, but I didn’t enjoy them enough to want to buy them again. I blame the packaging – it had me expecting creamy chocolate truffles and caramelized flan but only delivered neutral sweetness that was boring by comparison.

For that, it gets an O. And I’ve now got flan cravings.