Today I’ll be reviewing a treat in the “Asian treats shaped like sticks” genre: Cheesecake Pejoy. I bought them in China.

Cheesecake Pejoy is made by Glico. They have a decent U.S. presence (they make Pocky), and various flavors of Pejoy are available in U.S. Asian grocery stores. I’d never seen the cheesecake version in America before, so when I came across them in China, I just had to pick up a box. 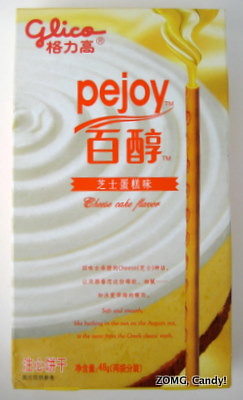 China is modernizing at a rapid clip, so I may be a bit behind the times, but I don’t think cheesecake is all that well known in China. There, even just cheese is a fairly new import, so I was surprised to see cheesecake as a flavor. But I’m not complaining – I love cheesecake. Probably too much! 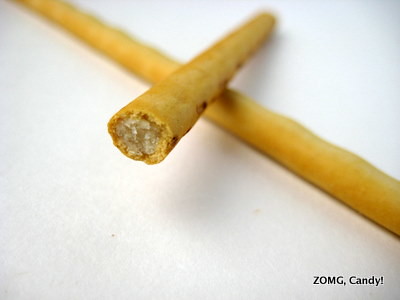 My Pejoys’ color varied from a pale yellow on the underbelly to a lovely golden brown toastiness on its top. Most of mine had little darker hatch marks – almost like grill marks – along the edges.

The cookie shell of the Pejoy tasted rather bland. I think it may have contained vanilla and butter, but the flavor was so neutral that it teetered on the edge of being savory in comparison to the sweeter filling. 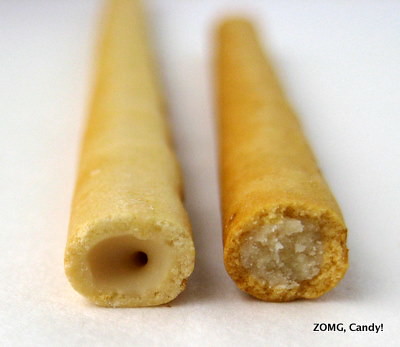 The off-white, grainy-looking filling was creamy on the tongue, but it lacked flow. The texture was fine, but the rippling ribbons of cheesecake filling depicted on the box made me expect something a bit more luxurious. I couldn’t help but be a little disappointed.

Similarly, the tangy cream cheese scent of the sticks made me expect a similarly sweet and tangy flavor. Alas, the filling turned out to taste sweet with a dairy-ness to it, but it wholly lacked in tanginess.

For me, tangy creaminess is the best part of cheesecake. These Pejoy captured the essence of cheesecake in scent but not taste. While they were a nice snack, they weren’t a cheesecake snack, so they get an O.

One thought on “Cheesecake Pejoy”