Charles Chocolates’s Teance Tea Collection, another free sample that I received, was absolutely gorgeous – little square tiles of slate grey adorned with traditional Chinese calligraphy. I have no idea how they did it, but I love the look. I also wish I knew more of the characters; second from the right is “cha” or tea, but that’s the only one I recognized. 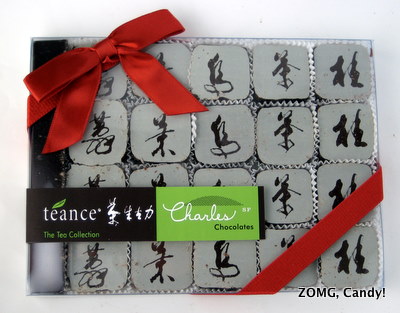 I was a bit nervous about the tea aspect. I’ve had Asian tea-flavored chocolates in the past and was not a fan. Fortunately, these were nothing like matcha chocolate – they were far better.

Each tile had a super thin outer layer of chocolate that crunched when I bit into it. It made me think of crunching footsteps in the snow – an instant and satisfying give. The ganache within was cool and creamy with a flawless texture and well-infused flavors. 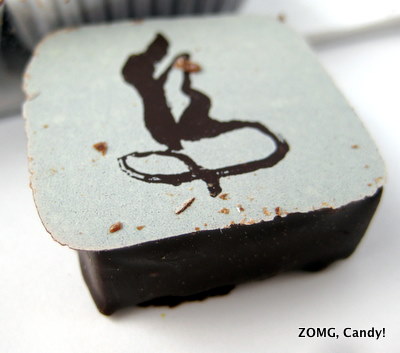 Formosa Baochong was described as “a premium Taiwanese tea with strong flavors that contrast well with chocolate.” It tasted dark and deep with notes of clove and nutmeg. The spice flavors came across nicely but weren’t overwhelming, making for a well-balanced truffle. 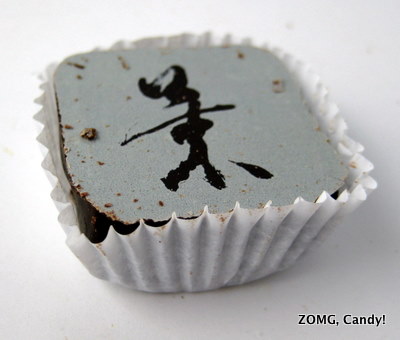 Special Jasmine was billed as “a delicately fragrant floral tea.” It was the only one of the set that actually tasted like my conception of how tea tastes.

It tasted just like jasmine tea, with a lightly bitter and almost astringent bite, and made me think of going out to dim sum with my parents. The finish was a little sweet for my taste – my throat burned a bit – but it was still enjoyable. 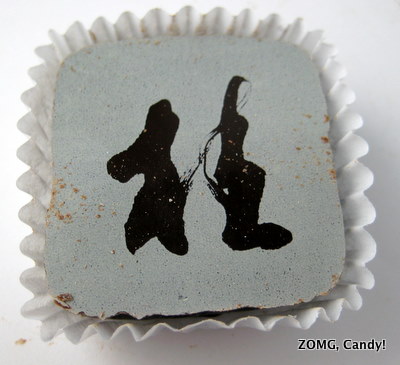 Osmanthus is apparently “a floral tea often used in Asian pastries with a very distinctive flavor.” In truffle form, it starts out tasting of chocolate and then gives way to a unique fruity flavor.

I get citrus and banana notes, but it doesn’t taste exactly like either. I can’t quite put my finger on what it tastes of. It’s definitely distinctive and quite intriguing. 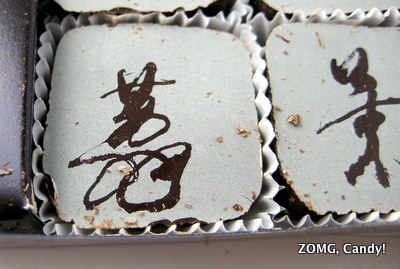 Lichee was described as “a traditional Asian fruit with flavors greatly enhanced by chocolate.” The lichee (or lychee, as I’m used to spelling it) flavor was spot on, with all of the fruit’s soft floral flavors. I don’t think the lichee flavor is exactly enhanced by the chocolate or that the two are destined flavor match, but the flavor combo is nice enough. 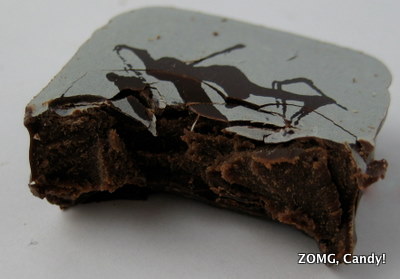 Charcoal Fired Oolong was “custom roasted Taiwan oolong over traditional bamboo baskets over a charcoal fire to medium dark.” It tasted brightly sweet and fruity at first before it took a darker turn, with a hint of smoky undertone. The brightness was present throughout, including in the finish, which was just wonderful.

Generally, I find drinking fancy teas unsatisfying because the tea always smells so much better than it tastes. Charles Chocolates managed to make tea truffles that taste like tea smells. The oolong, osmanthus, and baochong were my favorites, but I enjoyed all of them. An OM.

One thought on “Charles Chocolates Teance – The Tea Collection”