I don’t believe in New Year’s resolutions (why wait until January 1st to change your life for the better?), but I’ll still take advantage of 2008 to clear out some old candy reviews to make room for all my new ones. These guys are from Halloween (oops), but I think the reviews will still be useful, as Russell Stover will just remold and repackage these for Christmas (trees, nutcrackers), Valentines (hearts), and Easter (eggs). 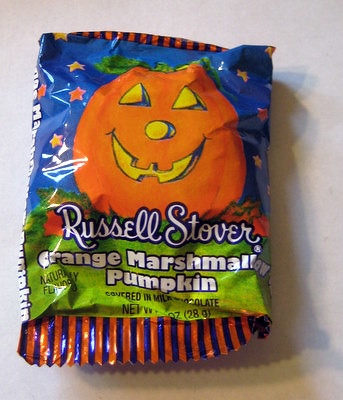 When they say orange, they mean orange. The innards are unnaturally brightly orange, almost highlighter-like in its fluorescence. The marshmallow is nice, fluffy, and foamy, the way I think marshmallow in chocolate should be, but it has a weirdly artificial, almost medicinal taste. An O. 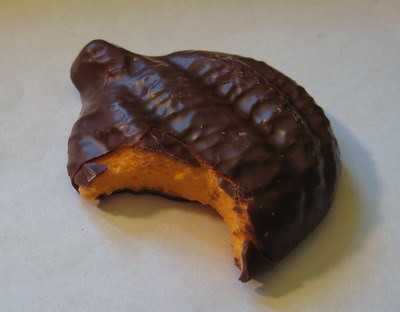 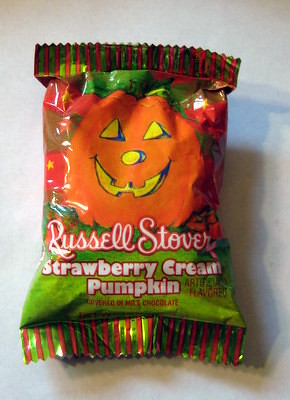 Unlike the orange marshmallow and the caramel & marshmallow pumpkins, the outside of this pumpkin was completely smooth instead of being textured. Perhaps it needs the thicker chocolate shell because it contains cream instead of marshmallow. Unfortunate, the milk chocolate shell was too sweet, and Russell Stover chocolate isn’t that great. With such a thick layer of chocolate coating, you can really taste its inferiority. 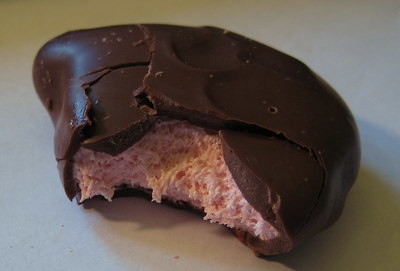 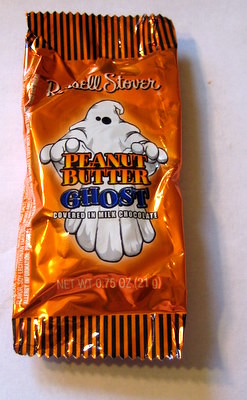 Again, I’d like to point out how the color orange has come to be associated with peanut butter thanks to Reese’s marketing. The Russell Stover packaging is cute enough, even if I think the chocolate inside looks more like a nun than a ghost. 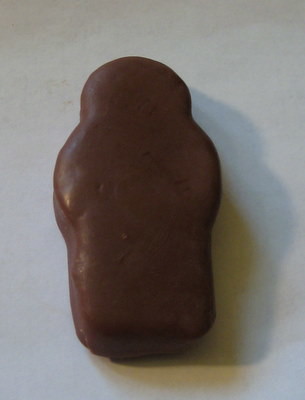 Usually I don’t like it when peanut butter overwhelms the chocolate it’s accompanying, but it works in this case because, quite frankly, I find Russell Stover chocolate (at least the kind they use to cover their regular cheap eats) to be boring. Consequently, it was great that this bar tasted strongly of peanut butter. The filling was pretty nice and had a super nutty finish. Its texture was quite smooth, without the crumbly grit of the peanut butter you’d find in a Reese’s. I do wish it were a little saltier. 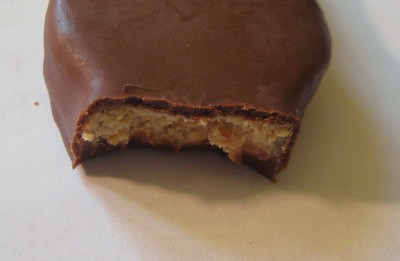 An O, though I liked this one much more than the pumpkins it shares a review page with. I think it would warrant an OM when it’s on sale post-holidays.