I received a trio of Caffex‘s coffee marshmallows as free samples. They’re not something that I would’ve picked out myself, as I’ve been off caffeine for years and thus have no need for energy candies. 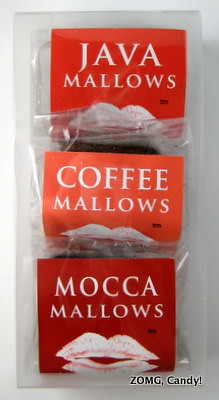 There was something slightly alarming about the warning on the package, “Not for minors and pregnant women.” But coffee marshmallows are a novel treat, so I was willing to give them a try. 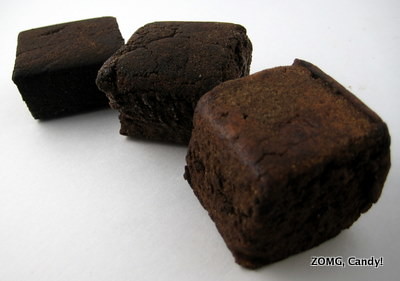 The Mocca Mallow was labeled as a “cocoa espresso marshmallow snack” and contained 200 mg of caffeine, roughly the equivalent of a couple of cups of coffee.

It was surprisingly dense and looked more like a brownie than a marshmallow. It was fun to squish it between my fingers. When eaten, the texture was fluffy, like a sponge, but lacked all spronginess when chewed. 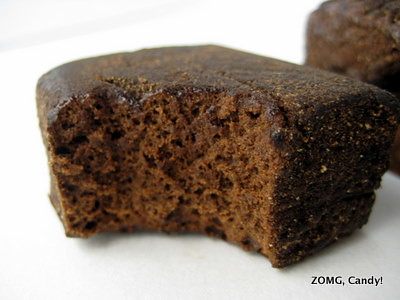 It tasted quite sweet and heavily of coffee but managed to lack bitterness. The chocolate flavor was deep and well balanced with the coffee. An OM.

The Coffee Mallow was a “double coffee marshmallow snack”, also with 200 mg of caffeine. It had a mild roasty flavor and a sweet finish. There was a slight bitterness to it that the Mocca lacked. 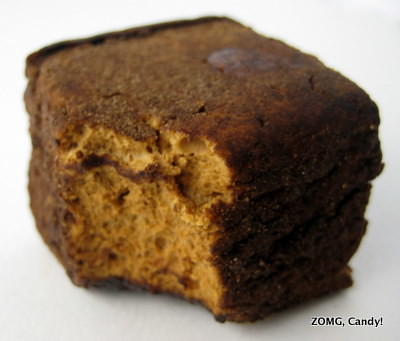 The texture had a bit of sugary graininess but was otherwise similarly fluffy. The coffee flavor was nice, but the treat as a whole lacked the complexity of the Mocca. An O.

Finally, the Java Mallow was a “double espresso marshmallow snack” with a whopping 280 mg of caffeine. As expected, the coffee flavor was even punchier here. 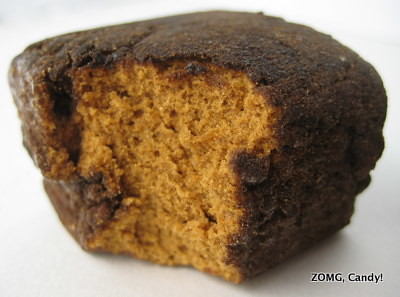 I think this marshmallow was even denser than the other two. Its finish was both bitter and sugary sweet. Another O.

I enjoyed the flavors and textures of these, but I think their caffeine wallop overwhelmed my usually caffeine-free system. I had a couple of bites of each, and a few hours later, I had an upset stomach and a caffeine headache.

Their caffeine content is not to be taken lightly! If you’re not as sensitive to the effects of caffeine as I am, they’re definitely a tasty way to perk yourself up. My ratings apply to their taste, not to their side effects, as I know I’m not Caffex’s target consumer base.

Ebidebby of Snack Love also reviewed these, if you’d like another take. She too, felt their buzz.

Today I'm wrapping up my coverage of the Sanders chocolates that I bought in a hospital gift shop. In case you...