When I was Cambridge over the summer, I walked past this tea shop nearly every time I went to the city centre marketplace. On my last day, I finally went in and bought this small selection of chocolates by Cafe Tasse (I think it means coffee cup in French. Man, I haven’t taken French in a long time). 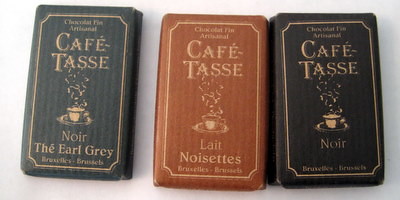 Under the wrapper, all three of these looked pretty plain, so I didn’t bother photographing them. The noir was a 60% dark chocolate. It had a dry snap with a grainy, not creamy melt. It was pretty sweet for a dark bar and had a bland, unexceptional, 1-dimensional flavor. An O.

The lait noisettes didn’t fare much better. It also had a dry snap, which is unusual for milk chocolate. I swear, for some reason, this had a minty finish, even though, as far I can remember, I never stored it near other minty things. And I didn’t taste any hazelnut, though it’s possible that tiny, ground up hazelnuts were what made it so dry. Another O.

The noir Earl Grey was slightly more exciting. Also a 60% dark, it tasted perfumey and floral, as Earl Grey tea does. The tea bits were added in the form of a dry grit, which gave it a nice fine crunch and textural grit. An OM, possibly thanks to the grading curve set by its less than stellar compatriots.