The Cadbury Picnic is a UK bar composed of milk chocolate with toffee, wafer, peanuts, sultanas, and a crispy cereal centre. You can tell it’s British not only from the spelling of centre but also from the “toffee,” which in British vernacular is actually what we would call caramel. That is, cooked sugar that is still sticky and viscous rather than solid and crunchy.

In case you’re wondering, like I was when I first read the wrapper, sultanas are basically raisins made with a specific grape. Not that it mattered much in the case of this bar. The chocolate that coated it was way too blandly sweet and overpowered all the “Picnic” treats. The toffee/caramel ribbon that sat under the wafers (or was that supposed to be the crispy cereal centre? hard to tell) could barely be tasted, and the peanuts that studded the bar were unroasted, a wasted flavor opportunity. 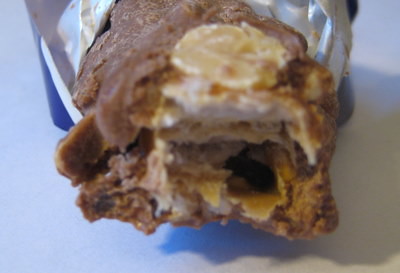 Overall, the bar was at least texturally interesting. It was a shame that so much went into this bar, so little actually managed to flavor it. A disappointing O.