Butterfinger Snackerz are a relatively new addition to the Butterfinger lineup. I got mine as a free sample as part of a gift bag from the National Confectioners Association. 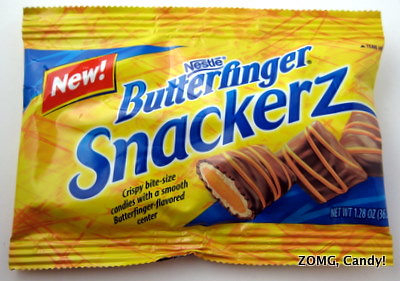 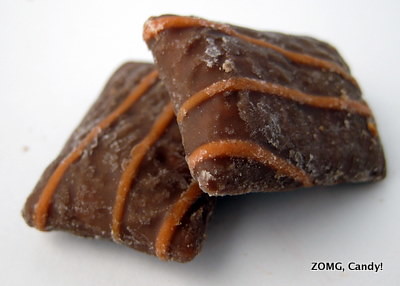 Why am I sharing both descriptions? Because the back is far more telling than the front – the keywords “chocolatey” and “peanut-buttery” indicate the presence of neither real chocolate nor real peanut butter. Hooray!

The Snackerz are about thumbnail sized. They had a hollow “peanut butter” schmear in the cetner which was surrounded by a candy crisp shell, all dipped in “chocolate” and prettily striped with more “peanut butter.” 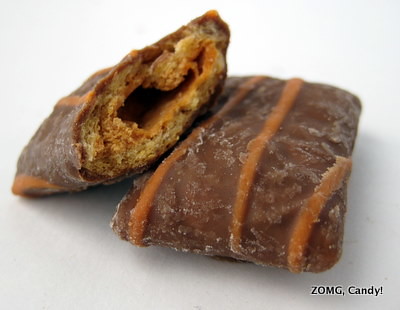 The candy crisp had a great textural crunch, like superthin shards of toffee, and a light peanut flavor. There was a nice saltiness to balance the sweetness of the confection.

The chocolate, however, was less impressive. It had a muted cocoa flavor that was practically non-existent. That’s what you get when you make your “chocolate” from palm oil! 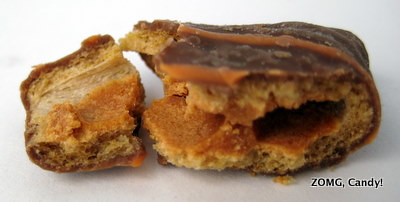 I think this would be awesome if it were mixed into ice cream or baked into cookies (as long as the texture could be preserved through baking), but on their own, they’re rather meh thanks to the lack of true chocolate flavor. An O.