Over spring break, the Yale Concert Band went on tour to Mexico. I, unfortunately, was not able to join them. On the plus side, kind friends brought me back Mexican candy, and their trip reminded me of all the Mexican candy in my stash (bought back home in Austin, TX and in a little candy shop in Pilsen, Chicago, IL) that I’ve yet to review. Today’s review is a Bubu Lubu, which I’m pretty sure is from an H.E.B. in Austin.

For the Bubu Lubu, however, the mockolate wasn’t that bad, perhaps because it was presented as a super thin layer of mockolate coating. It tasted pretty sweet but was otherwise unremarkable but also inoffensive. The texture may have been a bit off, but again, it was so thin that it was hard to tell. 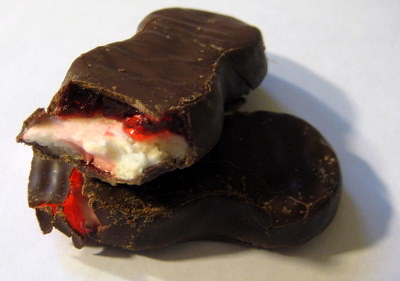 The strawberry jelly was texturally surprising. I expected goo or jam. Instead, it was more gelatinous, like the texture of a fruit gem center. I thought the flavor was more raspberry than strawberry. Finally, the marshmallow that made up the bulk of the treat was foamy, springy, and unremarkable.

The Bubu Lubu isn’t bad, but it’s also not good, so it gets the dubious distiction of an indifferent —. On the plus side, the nutrition facts are pretty good because the treat is mostly marshmallow: 126 calories, 2 grams of fat, and 2 grams of saturated fat. Still, I’d rather expend my discretionary calories on something that tastes good and is a bit more interesting and satisfying.