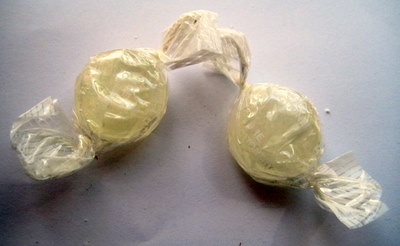 I had no idea what to expect from the acid drops I bought. Do they taste like battery acid? Citric acid? Not really like acid at all? In fact, the opaque butterscotch-sized disks tasted lightly of a ctirus sweetness. The best word I can come up with to describe these is clean. They’re cleansing and refreshing, like a light sorbet. If you’ve ever had a Chinese popsicle called a xue bing, they taste just like that. An OM. 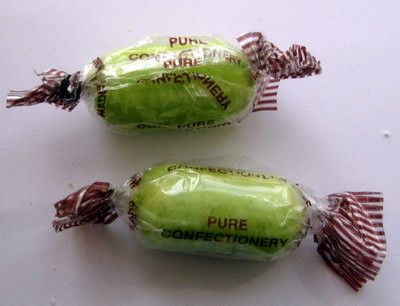 Lime and chocolate? It sounds like a strange flavor combination, but these guys were pretty ubiquitous in the British bulk candy places that I visited, and they’re made by several generic brands. I thought they tasted like the hard candy version of a lime and chocolate Tootsie Roll mash-up. The lime was brightly sweet and citrusy while the chocolate was more of a light cocoa. My lime and chocolate may have been lingering in the bulk bin for too long, for when I crunched it, it turned chewy, in the way that old hard candies can get. Overall, not a bad candy, but not something I missed or would ever crave. An O.

One thought on “British Boiled Sweets – Part I”