Today we continue Monday’s review of British hard candies with a lemon sherbet drop and the rosy apple.

My lemon sherbet drop wasn’t exactly a hard candy anymore. I think mine had just been sitting in the bulk bin for a bit too long and suffered by softening. It tasted pretty much just like a standard lemon drop, but it also had a light fizziness to it, which was quite nice. I wish lemon drops came with that nice fizziness. An OM. 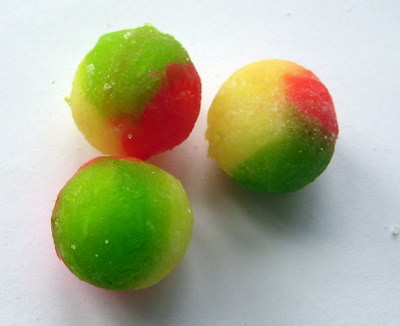 I loved the rosy apple mostly because it looks like a mini bouncy ball, the kind that comes out of those little vending machines for a quarter. The candy was super dense and hard with a slow melt and a mellow red apple flavor rather than a sour granny smith taste. Another OM, though I probably would’ve given it just an O had they not been so pretty.