I bought a trio of booze-filled Lindt bars two summers ago in Cambridge, England. Whisky is pictured below; the other two were Irish Coffee and Cointreau. While I tasted the chocolates soon after I bought them, it took me until now to get around to writing about them. 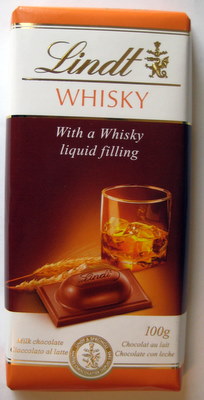 Why the wait? Because every single one of the three bars that I had just shelled out quite a bit of dough for turned out to be all dried up when I opened them! I sent Lindt an email to complain, and while I waited for the response that never came, I forgot about them.

When I opened them, the chocolates appeared to be pristine. They looked like a pill-pack of chocolate, and each Lindt-stamped capsule looked unblemished and, I imagined, full of the promised “liquid filling.” 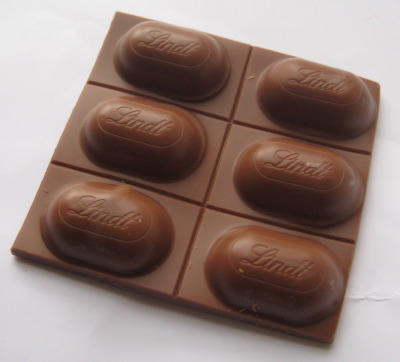 This was the summer of 2008, and the bars were marked as being good until April and May 2009. But when I chomped into the capsules, the insides were all dried up and crystallized. Boo.

I’m not sure if they were supposed to be like that, or if the posh (and pricey!) shop that I bought them from stored them incorrectly, or if Lindt was overly optimistic with their sell-by dates, but I was sorely disappointed. They promised liquid fillings. Of booze! 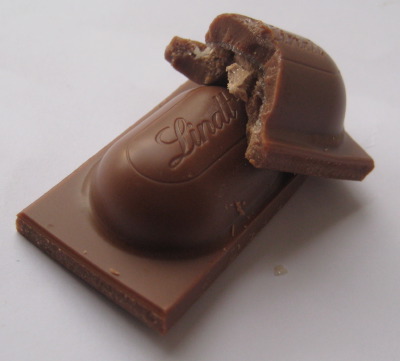 Maybe now’s a good time to add the aside that I was 20 this summer and earnestly learning about the cultural differences between the U.S. and the U.K. No open container laws; cheap and plentiful beers, ales, and ciders; and I never once got carded.

Anyway, the decidedly non-liquid fillings had lost their flavor along with their moisture. Cointreau was maybe tinged with orange, and Whisky had a nearly imperceptible alcoholic finish, but they otherwise just tasted like milk chocolate that was maybe a tad sweeter than usual.

In the state that I got these, they deserve a —. And Lindt gets the same for their (lack of) customer service. As far as I know, they’re not available in the U.S., but they seem to still be sold in the U.K., and with a few more flavors on offer.