What’s your favorite ice cream flavor? I’m hard pressed to choose just one (I’m a horribly indecisive person), but for me, mint chocolate chip is definitely up there. I used to hate it when the dining halls would put out pistachio ice cream because it was always a dead ringer for Andes mint chocolate chip. I would happily start to scoop myself a dish, only to discover that, blech, it was pistachio. Thus, when Baskin Robbins offered to send me samples of some of their latest candies, I was happy to see that they included a package mint chocolate chip soft candy.

The mint chocolate chip soft candy came individually wrapped in a pink foil bag in a cardboard, movie candy-like box. I could smell the mintiness through the silver wrapper. The candies were shaped in little rectangular blocks, slightly smaller than Hi-Chew blocks. Volume-wise, I’d guesstimate them to be about the same as Starbursts. The wrappers were slick with grease when I picked them up, and unwrapping them revealed the shiny, greasy, unnaturally green Baskin Robbins candy within. The greasiness was off-putting, and the color was slightly alarming, but in retrospect, mint chocolate chip ice cream is also pretty unnaturally colored. 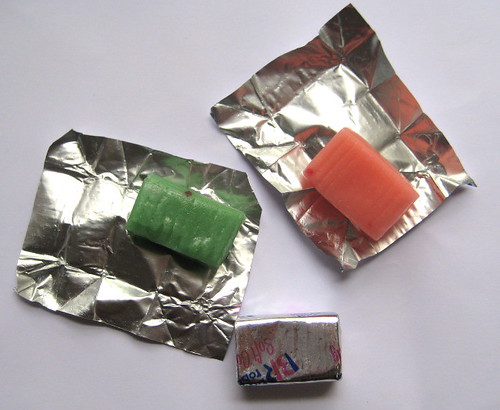 The candy had a soft, non-sticky, vaguely grainy chew. I think the greasiness strongly contributed to the non-sticky factor. Taste-wise, the candy was quite minty and fake chocolatey. I thought it did a great job of capturing mint chocolate chip ice cream, since the chocolate chips in the ice cream are chilled and in such small pieces that they don’t quite taste like normal chocolate does. Despite the greasiness, I rather liked these guys. I’ll never stick them in my pocket or purse for fear of leaving a grease stain, and I’m not compulsively polishing them off, but I think I’ll keep the rest of the box for myself. If they weren’t so greasy, I’d give them an OM, but because they are, they get an O.

The strawberry candies were the same size, had the same texture, and were just as slick with grease as the mint chocolate chip ones. They also had a much stronger smell (of artificial strawberry rather than of mint, of course) that was immediately perceptible upon opening the bag. And they tasted like they smelled – of super sweet, super artificially fruity strawberry ice cream. I don’t really like strawberry ice cream, so I was pretty ambivalent about the Baskin Robbins candy version, and they get an O.

Elsewhere in the candyblogosphere, Monica tried these and their sugar-free counterparts at CandyAddict, and Cybele tasted the mint chocolate chip.