My roommate brought home a pack of these Sugar and Spice-flavored version of Aunt Sally’s Creamy Pralines after her trip home to New Orleans. I nabbed one and filed it away in my candy stash, where it promptly got forgotten.

Thankfully, per Roddy’s urging on the ZOMG, Candy! Facebook discussion page, I dug it out and ate it up. And I sent Roddy a box of candy for his trouble (incentive for you to join the Facebook page!). 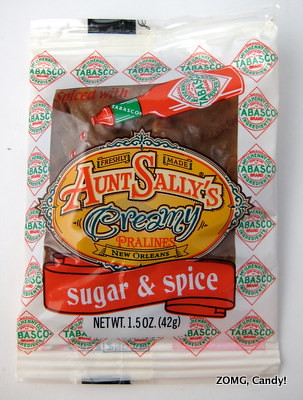 A praline, in the Southern sense, is a mixture of sugar, nuts, and cream. New Orleans pralines, like mine, feature pecans as the nut of choice.

This sugar & spice flavored praline was intriguing because of the bottle of Tabasco and the Tabasco logos that decorated the packaging. I think it’s the first Tabasco candy I’ve ever come across. 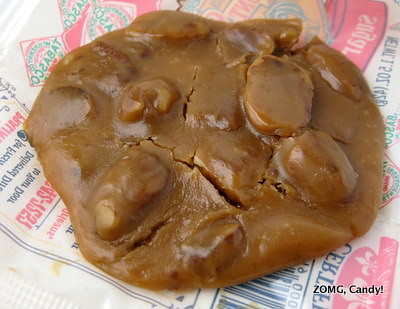 Alas, this praline had seen better days. I think it was a combination of elapsed time and summer heat wave that left it slightly melted, shiny, and droopy. Not exactly appetizing.

Pecans are a relatively soft nut to start; the ones in my praline had softened further, along with the praline itself. I wish I had eaten this while it was fresh. Based on the other pralines I’ve had before, I’m pretty sure it’s supposed to be crisp. 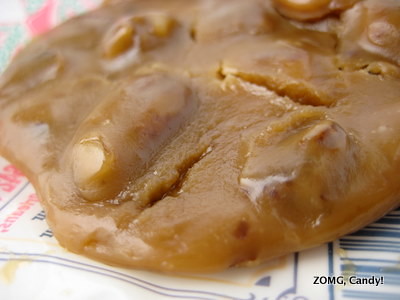 The praline initially tasted lightly spicy but was mostly sweet and savory. The pecans added their mild but distinct flavor.

The texture was grainy and soft (again, the disclaimer that mine may have softened with time/heat wave). As the sugar grains melted away, a powerfully tingly underlying heat came through.

I don’t think it’s fair of me to review this praline as is because the texture may have changed, so my O rating comes with a grain of salt. I found the spiciness to be unique and interesting enough that I’m glad I tried the praline, but the sweet and savory flavor threw me for a bit of a loop.