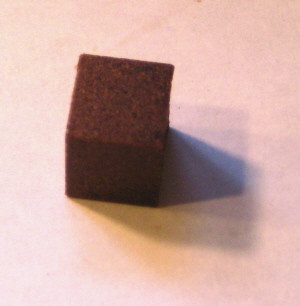 to crunch because it was about 1 cm x 1 cm x 1 cm. Though tiny, the Choco Milo is delicious. Its chocolate flavor is reminiscent of that of hot cocoa, and it strikes a perfect bittersweet balance. OMG. Unfortunately, I grabbed this one out of a dish at a party of an acquaintance and have no idea where to find more.

Kusugai (BUY!) makes a lot of great Asian candies; their gummies are especially popular and deliciously faithful to their fruits’ taste. From my first quick glance at the wrapper of these Kasugai hard candies, I expected these to be a mix of individually wrapped candies of different flavors. A pineapple here, an apple there, a… bell pepper? Wait. There are vegetables on the wrapper too! My Chinese reading skills are nearly nonexistent, but I do recognize the second character as one that usually means “vegetable”.

These pleasantly light and sweet candies were all the same color – orange – and all the same difficult to pin down flavor. I definitely tasted pineapple; the bell pepper, not so much. I’d describe these as V8 Splash (BUY!) flavored candy. Again, they were pleasant enough, but not something I’d want to eat again and again. Just an O, but a positive one.

I didn’t know what these were called but managed to stumble across them on Amazon (BUY!). The cow and barn motif (which I find adorable, by the way) match up, so I think it’s safe to assume they’re the same candy. 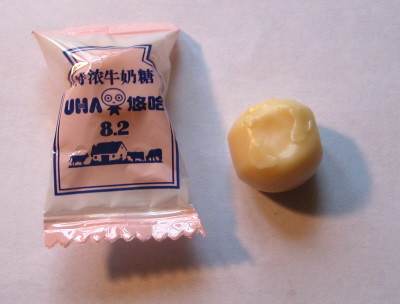 I think I’ve yet to meet an Asian milk candy (BUY!) I didn’t like. To me, they’re all pretty much the same. They’ve all been a milky, creamy vanilla, but such a delicious vanilla, with that extra bit of vanilla essence oomph that elevates it to the next level. That oomph is difficult to describe. It’s like the difference between generic vanilla ice cream and the best homemade vanilla ice cream (oh Blue Bell, why haven’t you made it to New England yet?) you’ve ever had. Which makes this way better than a vanilla Tootsie Roll. In this particular brand of milk candy, the vanilla flavor is more that of vanilla extract than vanilla bean, but it still works! An OM.