On Monday, I reviewed the Butterfinger. Today’s review is of the 5th Avenue, a highly similar but less well known peanut butter bar made by Hershey’s.

The 5th Avenue is “crunchy peanut butter in a rich, chocolatey coating”. If you’re new to the candy blogging world, you should know that “chocolatey” is candy marketing speak for “not made of real chocolate”. Yum… Still, it fared better than most mockolate bars did. 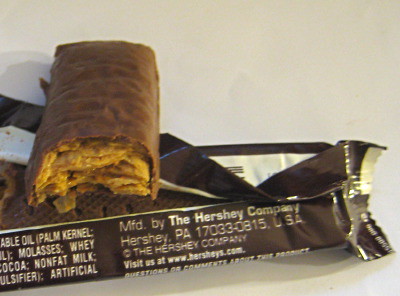 All and all, the 5th Avenue turned out to be a nice combination of salty and sweet, though I personally would’ve tempered the sweet just a bit. I give it an OM, though it may have the advantage of framing effects, as I tasted it alongside the Butterfinger.

And if you want a second opinion, here’s Cybele’s take on a head-to-head match-up of the two.